New face RIIKI has been steadily establishing herself as a fixture in the pop scene in her home country of New Zealand, as well across the pond in Australia. She has hit 2020 running with her third single, “Share Your Luv”, a groove-laden track that showcases RIIKI’s gorgeous vocal tone, and effortless talent for creating pop hooks.

Delving into the feeling of being on the receiving end of a drastic and unexpected change of heart, the track is a heartfelt exploration of heartache and longing, while also being a celebration of the realisation that you have the strength to get by on your own.

“I’m usually the friend helping people I know around me in these situations,” said RIIKI. “But it just feels so damn real when you’re in it and you truly experience that really sad feeling you never saw coming. Although, it is so important that if you fall into that situation you remind yourself ‘you were never the problem or held responsible, they were’. Don’t blame yourself, instead have a lil boogie, because this only made you way stronger.”

With a refreshing blend of elegance meets edge, Raquel Abolins-Reid is indie-pop newcomer RIIKI. Raised in New Zealand’s creative capital city and now aged 20, RIIKI is still young, but has many stories to tell.

Her second single “High Heights” is testament to the raw skill in her songwriting. Co-produced by Simon Gooding (P!nk, Dua Lipa and Migos), the track made an appearance on the Hot 20 NZ Singles Charts for a number of weeks, as well as making it onto Apple Music’s A-list Pop and New Music Daily playlists, and featuring on Spotify’s Pop Edge and New Music Friday playlists in NZ/AU, Sweden, Denmark, Iceland, and Norway.

With a sharpened and groovy spin on the indie-pop genre that has earnt her comparisons to streaming sensation Benee, RIIKI is a multi-disciplined artist, showcasing skill in choreography, production, visual direction, poetry, photography, and much more.

Over the course of just a few singles, and now with a brand new shiny deal signed with Global agency WME, RIIKI has already developed a strong presence with pop tastemakers, garnering praise from Coup De Main, The Interns and PileRats, and snagging opening slots for the likes of Keith and Otium.

Her musical craft is infused by a diverse range of influences, from James Blake and Jeff Buckley, to Toro y moi and Jorja Smith. RIIKI produces every aspect of her music herself, hoping to inspire and relate to others experiencing the same realms of young adulthood.

“Share Your Luv” is available to stream on all platforms now!

“A raw, honest songwriter with a knack for effortless hooks.” – The Interns

“(RIIKI) is one of those enviable creatures blessed with many talents.” – NZ Musician 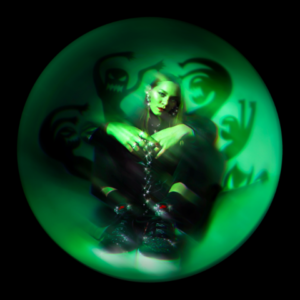