Norma Jean, the iconic metalcore act out of Douglasvill, USA, are coming to Australian shores in May 2020 alongside brutal hardcore Australian crew Cursed Earth, presented by Destroy All Lines. Tickets are available online and selling fast at https://destroyalllines.lnk.to/norma.

The US outfit put out their latest album All Hail in 2019 (available now at all outlets athttps://NormaJean.ffm.to/album – and this is the first opportunity for Australian audiences to hear and see the new tracks from the record live! Saturday 16th May’s show in Melbourne at Evelyn Hotel is SOLD OUT. A second Melbourne show at the Evelyn Hotel is on sale now on Monday 18th May.

Amplifying their classic brutality through progressive, resounding energy, paired with sonic and thematic growth, Norma Jean’s sound has matured over the course of a two-decade career. To date, the band has unleashed seven critically acclaimed albums, culminating in 2016’s Polar Similar. Earning a first-week feature in NPR’s coveted “All Songs Considered,” Norma Jean was lauded as “among those bands in the early 2000s that innovated, gave this extreme music shape and smartly grew along with its fan base.” High marks came from Metal Hammer [4-out-of-5], Metal Injection[9-out-of-10], and New Noise [4.5-out-of-5]. Cultivating a celebrated canon, the band has collaborated with members of Deftones, Underoath, Helmet, and other luminaries, and toured alongside metal visionaries from Lamb of God, and Rob Zombie to Korn and System of a Down.

Joining the band on tour in Australia is Cursed Earth – Formed in Perth in 2013, they established themselves as one of metal’s bleakest and most powerful voices. They released The Deathbed Sessions in 2019, calling on eight of heavy music’s fiercest voices to lend guest vocals on the mixtape. Fuelled by pure hate and aggression, The Deathbed Sessions features guest vocals from the likes of Larissa Stupar (Venom Prison), Matt Honeycutt (Kublai Khan), Joel Birch (The Amity Affliction), Booka Nile & Sean Harmanis (Make Them Suffer), Nick Adams (Justice For The Damned), Mark Poida (Aversions Crown) and Jack McDonald (Cast Down).

Watch ‘Mind Over Mind’ below 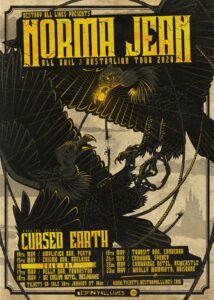