Imagine the cave where music was born. In the introduction to their 9th studio album HUMAN. II: NATURE., NIGHTWISH take us all the way back to this ancient place and time when bashing rocks became rhythm and voice turned into harmonies. In the course of the millennia, this amazing cultural achievement evolved via Bach and Beethoven into blues, rock and heavy metal – a mental journey that the Finns trace in their upcoming full-length’s first song, ‘Music’.

This opening track features all the elements that NIGHTWISH have fused into their own unmistakable sound ever since the band came to life in the small Karelian town of Kitee in 1996. There are the keyboards, which are also being used by bandleader, main composer, and lyricist Tuomas Holopainen at the starting point in the creation process of each of his albums. Another distinctive tone manifests in the Uilleann Pipes played by Northern English multi-instrumentalist Troy Donockley. The multi-instrumentalist and his great voice have enriched the sound of NIGHTWISH with a traditional flavour since Troy’s first appearance on the album Dark Passion Play (2007), which led to him becoming a permanent member in 2013. Guitarist Emppu Vuorinenleaves his metallic mark on ‘Music’ with a rocking solo. The same can be said about exceptional drummer Kai Hahto, who has been infusing his versatile, and highly precise style since the recording of Endless Forms Most Beautiful (2015). The other half of the band’s rhythm section rests solidly on the rock of Marko Hietala’s bass lines. The cherished Finnish veteran also contributes vocally with his deep sonorous timbre. On these massive rhythmic pillars rests a complex sound vault with an arching superstructure that is ornamented by stunning choirs and strings.

Making the most of the two excellent male voices of Marko and Troy, Tuomas has gifted each with a tailor-made song, ‘Harvest’ and ‘Endlessness’, on the new album. Yet there can be not a shred of doubt that Floor Jansen has the leading vocal role in NIGHTWISH. To capture the long career of the Dutch singer would fill a book. Her powerful, stylistically versatile voice and strong stage presence had quickly attracted a large following with Dutch symphonic metal outfit AFTER FOREVER, which were founded in 1995 and officially dissolved in 2009. Even back then, the dedication and determination of the charismatic frontwoman was easily noticeable. Floor’s unconditional devotion to always expand her own boundaries is once again showing onHUMAN. II: NATURE. Floor already delivered a world-class performance on the previous album, Endless Forms Most Beautiful (2015), which prompted NIGHTWISH’s orchestral arranger Pip Williams, a university music lecturer with pitch perfect hearing, to state that “Floor is the best singer for NIGHTWISH as she masters all styles perfectly.” On HUMAN. II: NATURE. the Dutch singer masters even technically highly demanding passages with apparent ease and gracefully breathes deep emotional life into the lyrical stories behind the songs.

Floor is also representative for a characteristic trait of the Finns: Tuomas and NIGHTWISH always strive for the very best in their music. All too often folk metal acts seem to recruit their instrumentalists in the closest Irish pub. NIGHTWISH, on the other hand, have introduced Troy Donockley into their midst, one of the best current Uilleann pipers on this planet. It also remains a contemporary trend among rock and metal musicians to work with orchestras with the attached price tag being the decisive criterion. NIGHTWISH, however, refine their sound with The London Session Orchestra, who are at the top of their genre alongside Hans Zimmer’s orchestra in Hollywood. Like a starred chef, Tuomas possesses the rare genius to handle these finest compositional ingredients in a virtuoso way. His exponentially increasing mastery of the orchestral body – also due to the meanwhile completely seamless cooperation with Pip Williams – finds its strongest expression yet in the instrumental second part of the album. “All the Works of Nature which Adorn the World”comes in eight connected but far ranging fascinating movements that should be understood as Tuomas’ “love letter to our world”. In its artistic approach, this musical epic of the Finnish storytellers resembles the cinematic observations of earthly beauty of Sir David Attenborough for example. And just like the work of the British nature film-maker, this display of beauty might also inspire to think about the state of earth, but it shall be duly noted that Tuomasdoes not want NIGHTWISH to be understood as a political band at all. 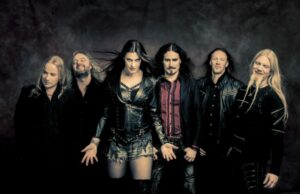 The thematic fields of “humanity”, “nature” and “technology”, “art” and “music” run as a red thread through HUMAN. II: NATURE., which is explicitly not a concept album. Therefore, it is only fitting that the first single ‘Noise’ – and the breath-taking video clip created around it, self-ironically take up the theme of the digitalised human.

To conclude, HUMAN. II: NATURE. is a musical bag of magic, which is filled with unexpected twists and turns stylistically ranging from rock to metal, from folk rock to the neo-classical – yet every second sounds 100% NIGHTWISH. Goose bumps are a certainty and an incredible wealth of detail promises exciting voyages of discovery, which will still yield hidden treasures after years of intensive listening, and still allow us to find hidden secrets. It does not take a prophet to predict that the Finns will add more precious metal to their impressive collection of 25 platinum and 20 gold certifications with this future classic. 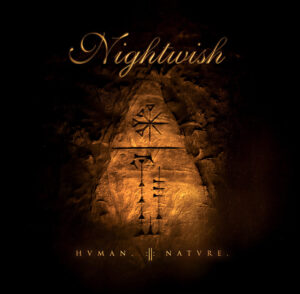 1. All The Works Of Nature Which Adorn The World – Vista

2. All The Works Of Nature Which Adorn The World – The Blue

3. All The Works Of Nature Which Adorn The World – The Green

4. All The Works Of Nature Which Adorn The World – Moors

5. All The Works Of Nature Which Adorn The World – Aurorae

6. All The Works Of Nature Which Adorn The World – Quiet As The Snow

7. All The Works Of Nature Which Adorn The World – Anthropocene

8. All The Works Of Nature Which Adorn The World – Ad Astra