MUSIC FROM THE HOME FRONT

“Anzac Day is special in Australia and New Zealand. It starts out sombre, millions gather at moving dawn services, reflecting in silence and paying tribute to the men and women of our armed forces. The haunting bugle sounds of ‘The Last Post’ remind us of our commitment: “Lest We Forget”. The COVID-19 pandemic provided cause for a similar mix of sombre reflection and meaningful celebration. Frontline workers in health and essential services were emerging as the soldiers of this war against COVID-19.

Families and communities were finding new ways to connect and feel closer than before, there was an overwhelming feeling that we were indeed ‘All In This Together’, which became the opening song of the show

We had just nine days to pull together Music From the Home Front. A show this big should take months. I am so proud of the results, humbled by the reaction to our incredible musical talent, and now so pleased to bring you this album to commemorate that special night.”
– Michael Gudinski, CEO of Frontier Touring and Chairman of the Mushroom Group

Mushroom Group is thrilled to announce the release of Music From The Home Front on double CD, triple vinyl, and digital download. This unique compilation of iconic songs and classic covers was recorded and broadcast for the premiere Anzac Day virtual concert event of the same name.

The double CD is to be released in Australia on Friday June 19. The triple vinyl version, which will be pressed on 180g premium coloured vinyl, individually numbered and presented in a deluxe gatefold sleeve, will be released on Friday 31 July (subject to change). Each and every copy of the triple vinyl that is pre-ordered will be signed by Michael Gudinski – a true collector’s edition release. And in a subtle touch of irony, it was a triple vinyl release that kick started Mushroom Records with the legendary Sunbury triple set in 1973!

Music From The Home Front is available to pre-order now.

100% of profits from Music From The Home Front are going to Support Act – Australia’s only charity delivering crisis relief services to artists, crew and music workers as a result of ill health, injury, a mental health problem, or some other crisis that impacts on their ability to work in music. Support Act which was established in 1997 to provide members of the music industry with breathing room to get back on track when they have hit a rough patch.

On Saturday 25 April 2020 the Australian and New Zealand music industries came together as one to commemorate Anzac Day and pay respect to frontline workers during the COVID-19 pandemic with Music From The Home Front. With traditional live concerts, tours, and festivals currently impossible, an unprecedented line up of more than fifty Australian and New Zealand artists instead turned to television and the internet to perform a spellbinding  selection of their own songs and covers live from their homes. Conceptualised by Michael Gudinski with help from legendary Australian rocker Jimmy Barnes, the special was broadcast live on the Nine Network in Australia, Three in New Zealand, and YouTube internationally, and was a commercial and critical success.

Music From The Home Front brought Australians and New Zealanders together in a time of adversity, allowing a moment of respite in these troubled times whilst honouring COVID-19 frontline workers and commemorating Anzac Day. 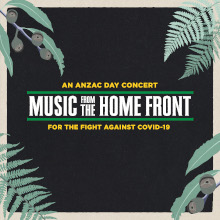 Music From The Home Front tracklist: