‘RESET’, AHEAD OF THE

RELEASE OF HIS EP

Dipping into the darker side of his sound, Motez releases ‘ReSet’, taken from his upcoming EP. The Adelaide via, Baghdad born producer continues to unveil his versatility as a producer using industrial tech elements throughout the techno anthem, making it the perfect soundtrack for any warehouse setting. ‘ReSet’ uses low-end bass, minimal vocal and wobbly synths to create an ethereal tone while still making fans want to dance.

Motez shares the inspiration for the single, “‘ReSet’ is all about linking my past musical tricks and what people knew me for in my current headspace and musical context, people who have listened to old Tez would recognise some of those little troupes but I’ve brought it into 2021. It’s a song about being rebellious, carefree, somewhat antagonistic and forgetting yourself on the dancefloor.”

Sitting at the forefront of Australian dance music, Motez is renowned for his dance-floor hit single ‘Down Like This feat. Tkay Maidza’ and the ARIA gold accredited record ‘The Future feat. Antony & Cleopatra’. Motez continues to prove himself as an innovative dance producer with recent singles, ‘Give Your Heart Away’ and ‘Give Me Space featuring The Kite String Tangle’, both of which scored support from triple j, Kiss FM (UK) and KCRW (US). In 2020, Motez also showcased a different side of his sound with the release of ‘Soulitude’, an EP created during isolation, designed to bring his fans a sense of serenity and tranquility throughout the trying time. The EP took Motez to win best release, best music video and best electronic artist at the 2020 South Australian music awards.

Drawing an ever-growing fanbase, Motez has played some of the biggest festivals around the country including Splendour In The Grass, Beyond The Valley, and Lost Paradise. Outside of producing his own work, Motez has created official remixes for the likes of Goldlink, Disclosure and Ellie Goulding, earning him praise from dance icons such as Destructo, Justin Martin, Diplo and Flume. Coming up on the touring side, Motez is set to play at the Sydney Opera House as part of Vivid in August.

‘ReSet’ is out now via Sweat It Out. Official single artwork below 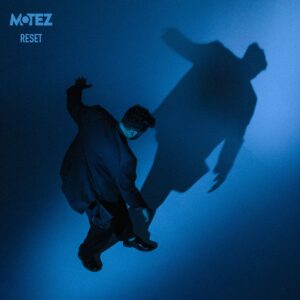 For more info on Motez, visit: