Mysterious newcomer Montana Sharp has today announced her breathtaking debut single Greenhouse, a theatrical pop ballad about the lengths humans will go to protect themselves, even if it ends up hurting even more in the long run, out July 30.  It’s a fascinating song and a wild debut – one which is accompanied by a showstopping film clip, directed by Majella Productions (Mo’Ju, Ecca Vandal, Birdz).  The clip sees Montana riding around on an endless carousel, cloaked in luscious red and gold, and watched on by spectators.

Greenhouse feels ready-made for a Eurovision campaign – definitely one for fans of Montaigne, Kate Miller-Heidke, Dresden Dolls, even Radiohead fanatics will find something to love here.  Montana Sharp successfully meshes fantastical, theatrical influences with modern, innovative pop sensibilities on Greenhouse; glorious piano marches valiantly alongside epic strings and the orchestral percussion arrangement, while Montana Sharp’s flawless, expressive vocal is the undeniable star of the show.  Speaking on the inspiration behind the song, Montana shares, “The metaphorical ‘greenhouse’ was once a fantastical sanctuary to seek refuge from the outside, but now it is safe outside and the protagonist is locked inside a madhouse.  I wrote this song at a very disturbed point in my life, engaging in a conversation with those self-protective mechanisms – but the song takes on a whole new meaning in 2020 with the coronavirus.  We’re all retreating to our ‘greenhouses’ to keep safe from the outside – but now we’re stuck inside!”

A song like Greenhouse demands a bold, larger-than-life visual representation – suffice to say, the Greenhouse film clip is nothing short of spectacular.  A gorgeous palette of circus reds and theatre golds characterise the setting while we observe Montana going around and around on her own personal carousel.  Up and down, up and down, the cyclical motion reminds the viewer of the nature of obsessive thoughts, and how easy it is to become stuck in them.  In short, this film clip is a must-watch.  Reflecting on the meaning of the clip, Montana Sharp says, “The protagonist is chained to the carousel while onlookers gaze in awe, ride and dance on the carousel, and then are ultimately free to leave.  The protagonist wakes up and discovers she is also free to leave, but finds herself unable to – she’s stuck on the carousel.” 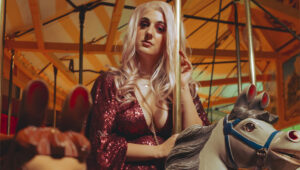 After watching this clip and hearing this brilliant song for the first time, you may be wondering, where on Earth did Montana Sharp come from? With a background in classical piano since early childhood and studying pop voice at Monash University, this highly trained, highly skilled musician has managed to marry complex chord structures and motifs found in classical music with modern pop songwriting conventions – and the result is incredibly captivating, catchy music.  Greenhouse is just the beginning – there’s so much more to come from the mysterious Montana Sharp.

Greenhouse is out now watch video  below