Otherworldly LA-based Aussie producer and DJ, Gem has today shared her dreamy new electro pop banger, Malibu, the first taste of her forthcoming EP set for release later this year. The track is accompanied by a suitably contemplative video that gently whisks the viewer through the utopian dreamstate of Gem’s mind.

This stylish, meditative, retro electro track is buoyed by warm synths, chilled 80s-inspired percussion and that wistful vocal.  For fans of The 1975, Jessie Ware and LANY, the song was mixed by Grammy winning Serve Courtois (LANY, Sasha Sloan, Loud Luxury) and mastered by multi Grammy award winning Dale Becker (Khalid, Macklemore, RÜFÜS DU SOL).  Tuned to 432hz, the frequency known to align oneself with the universe, Gem explains, “This song is my love letter to the universe, written with the intention of manifesting new love and produced in 432hz, I wanted to experiment with the powerful formula of frequency + intention = healing.” Gem contemplates, “What if producers could be the modern day shaman?”

Having lived in LA and made an impressive splash in the entertainment industry for the last year, Gem has revelled in the spotlight playing regular high-profile gigs, including The Emmy Awards pre-party and Pride Festival in Miami and NYC.  She recently flew back home to Australia to perform at the Melbourne Grand Prix, but the event was cancelled due to the Covid-19 pandemic, which luckily saw her able to hunker down and isolate here in Aus with her family.

Proudly repping Australia, Gem was named one of the top 5 female producers in the world to watch by Showbiz Magazine and she’s been welcomed in to the industry’s inner circle via the Grammy NEXT program as one of the top emerging producers for 2020-2021. Gem insights, “LA has acted as a teacher and mentor to me, the city itself has so many different colours, smells and experiences – the access to inspiration in that wonderful city is vast and plentiful.”

Best known for her electro reinterpretations of 70s classics on her covers album the2070s that peaked at #2 on the iTunes electronic charts and last year saw her nominated for best electronic album and producer of the year at the Independent Music Awards in the US. “It feels like a coming of age in a weird way, to be stepping out from behind the desk and releasing original music that is my own,” Gem explains. “It definitely has a greater sense of vulnerability attached and at the same time it feels like I’m exactly where I need to be, letting my guard down and getting my true music out.”

Created by Hussam Eissa, an emerging digital artist out of Egypt, this 4D video takes viewers on a journey through the wonderland of the inner workings of Gem’s imagination. “The single artwork and video clip is inspired by a vivid dream I had. I was traveling in my bed over the waves of Malibu, constantly searching. The waves lapped at the side of the bed as it rolled gently on the ocean. A whale swam around me and jumped out of the water and dived across the bed while I stayed asleep thinking it was a dream, not realising my thoughts had been so powerful the room had burst open and the bed really was laying on the waves, realising then that being awake can be a simulated dream state if you’re truly living presently from your heart chakra.”

Malibu is out now | official single artwork work below 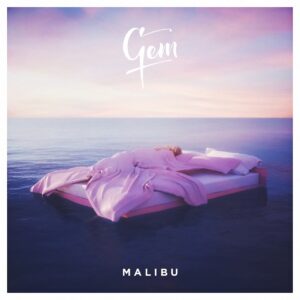