“There are stories we tell our children as they drift into sleep. Stories we invent to explain the impossible, and others we carry with us all our lives. Stories of fear, love and light.”
– Mark Seymour

From Slow Dawn, today Mark Seymour releases the first single, ‘The Whole World Is Dreaming’. Mark says, “The new conditions we find ourselves in have prompted me to re-consider some of the ideas I’ve touched on in the course of writing Slow Dawn. The virus has provoked an unprecedented global effort. Never in my lifetime have I witnessed the entire species striving to secure its future free of violence or bloodshed. Not by taking lives but by saving them, regardless of national interest or political outcome. Instead, perhaps for the first time in human history we are acknowledging on a planetary scale, our mutual dependence and vulnerability. I have tried to write in isolation with mixed results. But at the very least, when the lads stepped in to add their grace, I wanted the songs on Slow Dawn to be as truthful as they could be. So that even as they changed shape, they would always speak for themselves, unvarnished, raw. ‘The Whole World Is Dreaming’ is perhaps the most successful of these. It was written to be sung at the beginning and end of life, to demonstrate love in its most direct and unvarnished form. To an infant or a dying parent, facing a new and unavoidable future, the outside world and the looming darkness of the end. And the ultimate state of being human: isolation.”

VIDEO: ‘The Whole World Is Dreaming’ by Mark Seymour & The Undertow

Mark Seymour & The Undertow’s co-headline tour with James Reyne has been rescheduled for 2021. Re-scheduled dates are to be advised. 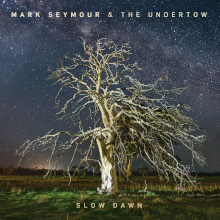 Slow Dawn tracklist:
1. Night Driving
2. Kliptown Mud
3. Against My Will
4. Applewood Road
5. The Demon Rum
6. Slow Dawn
7. The Dogs Of Williamstown
8. How The West Was Won
9. The Ones Who Got Away
10. Joanna
11. The Whole World Is Dreaming