– ALL PROCEEDS TO AUS BUSHFIRE AID

Just announced two exclusive Australian premiere screenings of the film at Ritz Cinemas Randwick in Sydney and IMAX in Melbourne on March 4, and as an added bonus, their Live At Joshua Tree film will be followed by a screening of the critically acclaimed Chemical Brothers film Don’t Think, with all proceeds raised going to The Red Cross to be put towards Australian bushfire aid.  Tickets will go on sale Wednesday 26 February at 9am AEDT and can be purchased here.

Double GRAMMY-nominated Australian trio RÜFÜS DU SOL have today announced LIVE FROM JOSHUA TREE – a live album and film featuring an immersive desert performance of songs curated from their critically acclaimed studio albums SOLACE, BLOOM and ATLAS, recorded and shot in the sprawling desert plains of Joshua Tree, California, with both live releases set to drop globally on March 6. The title-track from their GRAMMY-nominated album SOLACE is the first to be released today, with fans able to get their hands on the anticipated audio and video of the song – straight from the 45-minute feature – simply by preordering the album on iTunes or presaving the album on DSPs; with Solace being a fitting debut as it captures the band’s emotive gravitas amongst the powerful energy of the desert landscape.  Watch Solace Live via Mixmag.

In a 45-minute immersive film traversing the depths of the band’s famed shows and critically acclaimed studio albums, RÜFÜS DU SOL: Live from Joshua Tree brings their emotive live experience from the global stage to the screen. Featuring never-before-heard material set amongst the allure of the Great American West, the sensory film is an homage to the band’s arrival as a global creative force. Watch the trailer for RÜFÜS DU SOL: Live from Joshua Tree here.

“The idea for a film was born out on a writing trip in Joshua Tree when we were trying to finish SOLACE.  We stayed up all night writing as the sun rose, this creeping light over the valley made its way into the room.  We climbed these wild rock formations to a little vista at the top, about 100 feet above where we were writing and sat to take in the sunrise.  We were listening to tunes on a speaker and someone put on Time by the Pachanga Boys.  Watching dawn break with this epic 15 minute journey playing out, we started joking about putting together a sunrise set in the desert where we would play to no one,” explains drummer James Hunt.  “People talk a lot of shit in the desert at 5am, but walking around this alien world at dawn, we definitely felt there was something calling us back out there.  So over an 18 month period, we workshopped ideas and locations and finally were able to to put time aside to shoot in September last year.  It was decided sunset would be more practical for our crew.  We originally planned for it to be a live stream, but as the idea grew and the production got bigger and bigger, it organically morphed into a film. It’s something that’s taken two years to pull together and something we are so excited to share with the world and make available everywhere.”

Since its release in 2018, SOLACE has been streamed over 150M times while the trio took to a worldwide tour with more than half a million tickets sold globally. Bringing their grandiose performances to iconic venues like Sidney Myer Music Bowl, Red Rocks, LA State Historic Park and Alexandra Palace, the band has earned two GRAMMY nominations, an ARIA award, and widespread notoriety for breaking ground in the live electronic genre. During their SOLACE run, RÜFÜS DU SOL produced an intimate video series in which they shared behind-the-scenes memories and moments that shaped the album in a nine-part collection on YouTube that can be viewed here.

The RÜFÜS DU SOL: Live from JoshuaTree album is set for release on March 6 via Warner Music, and the Live from Joshua Tree film will be released on YouTube on the same day. 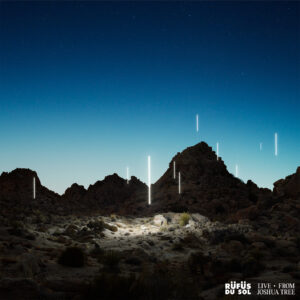