“STELLAR” FROM HIS FORTHCOMING

“JXN has yet again shown us another side to his artistry, and this is one that I’m really excited about because it feels so natural and candid.” – Thomas Bleach

“JXN is a superstar in the making” – Cool Accidents

On the single, Brazier notes “The song is about achieving personal goals and how everything is going to be okay” 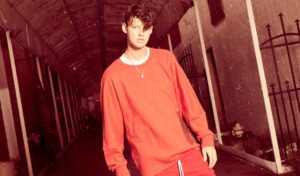 Having made an impressive introduction with the a string of singles over the past year and clocking up over 10 million artist streams, beginning with 2018’s simmering debut “Solitude”, he’s continued to grow while also working with an esteemed list of collaborators. “Red Lights”, saw his team-up with rap giant A Boogie Wit Da Hoodie and “Going Off” brought him together with A$AP Twelvvy. Meanwhile, “Just Okay” saw him go it alone, showing off his vulnerability as a songwriter.

In 2019, Brazier toured nationally supporting Allday, Mallrat and E^ST at venues across Australia, along with a string of solo shows in Melbourne, Brisbane and Sydney. While Allday was yet to feature on the song, Brazier took the opportunity to try out the unreleased cut of “Outta Space”. It received a rapturous response with crowds singing back the hook by the time the song had reached its end. Earlier this year, JXN went on to release the lead single from the EP, “Outta Space” featuring Allday and Fossa Beats.

But now he’s armed with his debut EP ‘NeverASadAdventure’. It’s a hypnotic collection of R&B-tinged tracks, including “STELLAR” and “Outta Space”, that showcase his versatility and commitment to carving out a unique sound. Pre-save the EP HERE.

“This is the EP you would listen to if we were going to out of space and you had music playing through the speakers of the rocket,” Brazier says.

Even though JXN has only been releasing his original music for a little over a year, he’s made good on that statement. His confident discography showcases a cohesive Alt Pop backdrop while also exploring endless possibilities.