“A collection of polished alt-rock pick-me-ups and feel-good collaborations,” – Billboard

“Far from a band merely surviving, it would seem Jimmy Eat World is thriving” – Upset Magazine

To celebrate the release of Surviving, Jimmy Eat World have unveiled the Jim Adkins and Michael Gill co-directed video for 555 – view below:

One of the most poignant, soul searching tracks on Surviving, the video provides a wry, fantastical counter-balance to the song’s emotional heft, with a strong 80’s sci-fi influence. 555 is another deeply personal song from Jim Adkins, about resisting accepting your reality and the damage it can cause. Speaking of the inspiration behind the new music video, Jim says:
“I’ve always liked the Rick Springfield video for ‘Bop ‘Till You Drop’. A reptilian overlord managing his minions gets overthrown by his workforce. He’s kind of trying to keep them in line, but one guy breaks into song and mass rebellion ensues. From the overlord’s perspective, that day was a pretty bad day.
“I always thought that was funny. So 555 sees me cast as a galactic evil master, overseeing an army of cloned species doing my bidding – this is the only life they know, joining me in song in this post-apocalyptic dystopia.”

Surviving is the band’s most personal, ambitious album to date and frontman Jim Adkins once again proves himself as one of the most prolific songwriters in rock & roll. The 10-track album was produced by the band and Integrity Blues producer Justin Meldal-Johnsen and features current singles Love Never and All The Way (Stay) (watch the Daniel Carberry video below)

An exclusive white coloured vinyl will also be available through JB Hi-Fi in Australia.

In the lead up to release, the acclaimed Arizona four piece appeared on Jimmy Kimmel Live!
Watch Love Never below:

Surviving is a timely reminder of just why Jimmy Eat World are still selling out venues, headlining festivals and scoring top 10 albums as new generations of fans adopt their songs as the soundtrack to their lives. 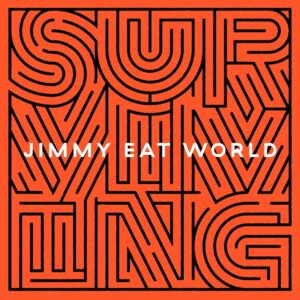