AND HIS DEBUT SINGLE

‘ALL IN YOUR STRIDE’

Meet Ben Alpine, the Melbourne alt-pop producer and songwriter who today shares his debut single ‘All In Your Stride’. Our first introduction to his solo project is both dreamy and vibrant, encapsulating everything to look forward to from the exciting new talent. Listen HERE.

Recorded with friends in 2019 before final mastering by Lachlan Carrick (Gotye, Gretta Ray, Jade Imagine), the track is inspired by the lush multi-instrumentation of synth-pop artist The Japanese Houseand the eclectism of Hippo Campus. Drawing from these contemporary influences while showcasing his love for ambient electronica, the track is awash with glimmering synths and organic percussive elements, while the nostalgia-soaked guitar lines capture brightness against the mellow soundscape.

Speaking of the track, Ben says “I had just gone through this really strange and hazy year of placing all my hopes in people and situations to make me happy, which ultimately didn’t amount to anything. I slowly came to the understanding that I had growing to do and that things will be okay, and with time and effort you can escape these ruts in your life. I was writing what I wanted to hear at the time over this instrumental that I felt so connected to, which became this personal mini-anthem for optimism and self-improvement.”

Listen to ‘All In Your Stride’ below

From former high-school band Echo Mono to numerous Soundcloud projects, Ben Alpine has been quietly prolific, drawing from these experiences while patiently honing his craft behind-the-scenes. ‘All In Your Stride’ is the culmination of this period, synthesising the pop sensibilities of his songwriting while amplifying the textured production style of previous work. Born out of a 2017 jam session and conceptually mapped out on a flight to Japan, the track served as a breakthrough moment for Ben, drawing him out of a period of self-doubt and reigniting his passion to create music.

‘All In Your Stride’ is out now. Stream HERE | Official single artwork below 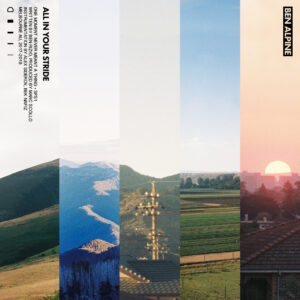