HOPE D GETS TANGLED UP

IN SOCIAL EXPECTATIONS IN

Fresh after making a bold new sonic statement with prevous single “Second” just earlier this year, Brisbane’s Hope D has once again delivered a brutally honest and captivating queer pop-rock anthem with new single “Common Denominator”. Watch below:
“Common Denominator” is a cheeky and energetic track, led by a conversational lyrical style and comically arrogant and exaggerated vocals telling the tale of two young naive teenage girls who find themselves in a relationship despite really not having anything but their sexual preference in common.
The music video follows the exaggerated idea of having ‘one thing in common’, as the two characters find their common denominator brings them together but ultimately wraps them up in problematic knots and messes up everything in their path (both on screen and off):
“It was so much fun to bring the idea to life, and acting as both characters was a clever way of further emphasising that ‘thing in common’. The video really captures the fun spirit of the song. It was so cool and so much fun – I haven’t done anything like it!
The canoe scene was traumatically hilarious, Georgia (my incredible double) and I were hysterical about getting in the water – and Bridget had a panic attack in the canoe. it was bloody freezing! I also crashed my car driving between a production meeting and costume meeting… but it was all so worth it to see the clip idea come to life” (Hope D)
Hope D has also announced a run of tour dates for October (obviously pending if travel allows). The Sydney and Melbourne shows are both free entry, and the newly added hometown Brisbane show tickets are via Moshtix.
Saturday 10th October – Golden Age Cinema, Sydney (Free Entry)
Sunday 11th October – The Grace Darling Hotel, Melbourne (Free Entry)
Saturday 26th September @6PM – The Outpost, Brisbane (NEW SHOW)
Saturday 17th October @6PM – The Outpost, Brisbane(SOLD OUT)
Saturday 17th October @9PM – The Outpost, Brisbane (SOLD OUT)
Sunday 18th October @6PM – The Outpost, Brisbane (SOLD OUT)
“hearing a song this honest and explosive and vibrant from a specifically queer POV is so validating and important.”- Abby Butler, triple j unearthed

“an edgy and pulsing track filled with driving guitars, whirling synth, angsty vocals and charm-filled lyricism.” – The Music
“The emergence of Hope D has been one of the lone bright spots for this hellscape of a year!”
– Dave Ruby Howe, triple j unearthed
” (Hope D) gave us an immediate ‘this is something special’ reaction that we haven’t felt in a little while now” – Pilerats 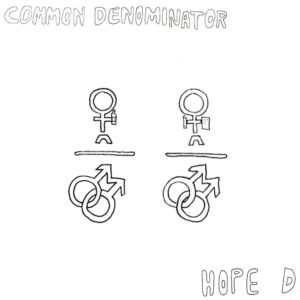 “Common Denominator” is out now on all digital streaming services. Official Single Artwork Above
After breaking onto the scene in late 2019 with her debut single “Swim”, alt-pop-rock artist Hope D captivated audiences with her eclectic capability to create purposeful, confessional and captivating music.
This release led her to taking home the inaugural QMusic Emerging Artist Award, performances at BIGSOUND 2019, Splendour In The Grass, Laneway Festival and King Street Crawl, as well as sold-out headline shows in her hometown Brisbane.

March 2020 saw her second release aptly named “Second”, once again wowing and surprising fans by her change in sound, but maintaining the same inviting charm and razor-sharp wit through her authentically honest, raw and relatable songs.
Hope’s newest single “Common Denominator” is set to yet again excite audiences with her unique medley of angsty whirl-pop-rock sound. “Common Denominator” tells the tale of an authentic young relationship between two girls with nothing in common. Hope is back with another queer anthem, proving once again her ability to cut straight to the heart.
Connect with Hope D: