Perth’s pop-punk five-piece Homestate are back with another catchy banger in the form of new single “Sunny Day”. The single comes as the second to be released off upcoming self-titled EP out Friday November 29, with a launch show taking place the day after in their hometown to celebrate!

The EP as a whole, mixed and mastered by Seb Barlow, proved to be a rewarding experience for the band as Barlow produced so many of the artists that have inspired their own music. The EP tackles relationships, the good and the bad, and how damaging past hurt and heartbreak can be. Homestate’s EP aims to act as a buffer for listeners and their life experiences, to give them a voice where they feel they might not have one. Fraser explains “each of the songs can be told from multiple perspectives and at some point in everyone’s life, they’re bound to relate. Life is hard, love iseven harder, but without both, nothing would be worthwhile”
Homestate formed in 2017 as the refined project of years of writing and playing together in different bands. The boys began building their sound together, drawing influence from the likes of artists such as The Wonder Years, State Champs and The Story So Far and in 2018, Homestate released their debut album ‘A World of Second Chances‘. With the better part of a decade of experience already under their belt, Homestate were quick to support an array of touring acts including Mayday Parade (US), The Maine (US), Waterparks (US) and Sydney favourites, Yours Truly. Homestate will launch their brand new self-titled EP to their homegrown audience at Lucy’s Love Shack in Perth on Saturday November 30 alongside friends Carrington, Triggerlip and Abandon Limbo.
“Sunny Day” is out now and available on all digital and streaming platforms athttps://linktr.ee/homestateau. ‘Homestate’ EP will be available Friday November 29. Tickets for Homestate’s launch show are available at the door only, so put this one in your calendar and get down early!
WATCH “SUNNY DAY” BELOW: 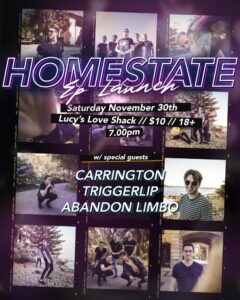