Sydney artist Hearteyes shares his vulnerable new record, Rock Album. All proceeds of Bandcamp sales will be donated to FreeHer, a fundraiser for incarcerated Aboriginal woman on behalf of Sisters Inside Inc. Listen HERE / Watch below

Rock Album is Maurice Santiago’s third release under Hearteyes, following Even Headbangers Get The Blues and last year’s Joyride The Stars mixtape. Where Headbangers and Joyride were spawned from restless frustration to suggest ‘genre-less is the future’, Rock Album reflect’s Santiago’s transition from producer to artist with clarity and confidence, asking what ‘guitar music’ truly is and means.

Noting the cathartic release of the record, Hearteyes shares: “Everything I write about is deeply personal; with the past two project I tried to dilute a lot of the storytelling with formulaic pop writing tropes, like repeating phrases and creating hooks, but I still felt so dissatisfied. ‘Rock Album’ is where I have finally mustered the courage to put everything out there and felt comfortable doing so.”

The fourteen tracks of Rock Album travel across multiple situations and perspectives. At its core remains the idea of turning to escapism to cope when struggling with mental illness, and especially right now, when even reality does not feel lucid. The production throughout the LP echoes those sentiments of waking up to feelings of fear, hopelessness and dread, most notably realised on ‘when i grow up‘, a Garbage cover shared by the band on Facebook.

Instrumentation is as integral as the lyrics in Rock Album’s storytelling, referencing the pop rock of Skye Ferreira and shapeshifting ability of The 1975 on ‘drunk on the roof‘ and latest single ‘there’s something going on’; the lo-fi hip-hop world of Brockhampton, indicative of Santiago’s work as a beat-maker on ‘gold links’ and ‘darker shades of blue’; the Rina Sawayama-esque nods to playing in hardcore bands as a teenager on ‘getting over gut feelings’; or the hard-fast electro of Charli XCX and warehouse raves with ‘ny superstar’ and ‘antisocial‘. Hearteyes marries it all on Rock Album with considered production, auto-tune and for the first time, acoustic guitars.

Joyride The Stars
FBi Radio Album Of The Week 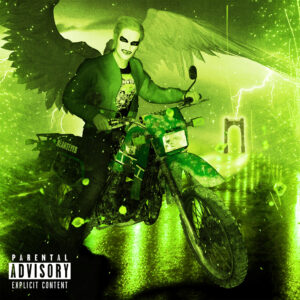 From his work as a former member of post-punk outfit Death Bells to the euphoric house of his George Michelle alias, and hardcore electro collaborations with Steel City Dance Discos. Maurice Santiago is a recognised member of Sydney’s underground. Through Hearteyes, he channels his pop ambitions by meshing gut-wrenching vulnerability into sleek, genre less tracks, born with the release of Joyride The Stars mixtape in 2019. What threads together all of Santiago’s work is the strength of his artistic vision and community minded, no rules ethos. Dismantling the perceptions of accessibility in music and rules of genre serve as Hearteyes’ mission