Over the course of three years, Tamworth songwriter Hattie Oates has flourished from being a 17 year old buzz artist, to now being a formidable voice that has captured the attention of fans and industry alike. Hattie’s new single, ‘High’, sees her stepping further into new sonic territory as she plays with darker pop tones and explores the effects of sudden impulses.

As her first release for the year, ‘High’ is a strong return for Hattie, who garnered solid attention in 2019 with the release of single ‘Bad’ and her 2018 debut EP, HATTIE. ‘High’ evokes the broodiness of BANKS and Billie Eilish, taking notes from the latter in the way space is used and production is executed – the final result wrapping the listener up with ease.

Recorded at Yap Yap Studios in Sydney and mastered by Ben Feggens (Mallrat,Vera Blue RÜFÜS DU SOL) at 301 Studios, ‘High’ builds off the blood-rushing-to-your-head stages of an early crush. The intoxicating effect thinking about that one person can provoke. For Hattie Oates, ‘High’ is an expression of raw attraction. “I wrote this song about that feeling you get when you have a new little crush and no matter how hard you try to ignore it, you can’t help the tingling butterflies in your belly! Especially when they catch you off guard and you feel like your heart is about to jump from your chest. That little adrenaline rush.” Hattie Oates

“I didn’t think Missy Higgins and Amy Winehouse could quite work as a combo from your ‘Sounds Like’, but I was proven very wrong.”
Triple J, Declan Byrne

“The Tamworth-based artist crafts tunes that feel equal parts vibrant and melancholic – they’re grounded in rich and emotive themes, but are lifted to exciting sonic heights by dynamic and unexpected production.”
Happy Magazine

‘High’ is another sign of the constant maturing and development of Hattie’s songwriting, as she plays with more complexities on record and introduces listeners to more of her own influences with each release. Having been exploring her love for music from an early age, Hattie’s music now reflects a young artist defining her identity on record.

‘High’ is out now 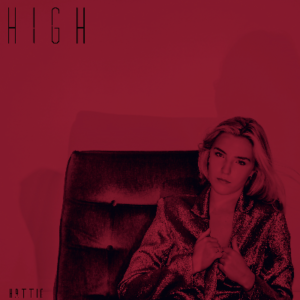