Hard rock juggernauts HALESTORM will be on Australian shores in December for their Australian headline tour, presented by MJR Presents by arrangement with UTA. Unfortunately, Black Stone Cherry are today having to cancel their appearances on this tour due to a Family Emergency.

The band have issued a statement: “Black Stone Cherry deeply regrets they have to cancel their performances in Australia, but due to a family emergency, they will not be able to play the shows. We look forward to coming back soon and putting on an amazing show for all you awesome fans and we thank you for your understanding.”

Stepping up to the plate and joining the epic rock shows in place of Black Stone Cherry will be NZ Rock outfit Villainy who have just released their third album ‘RAISED IN THE DARK’. ‘RAISED IN THE DARK’ has cemented them as a dominant force in NZ after debuting at #2 in the Top 40 and containing 4 x Top 10 radio singles and delivered some crushing truths with the uplifting slacker anthem (and #1 Rock single) ‘Dreams’; the dystopian banger ‘Tiny Little Island’, and the latest #1 single ‘Cut’. The album earned the band a nomination for Best Rock Artist at this year’s VNZMAs (already two time winners from their previous LPS), sees Villainy at the peak of their powers and are Villainy’s first shows on Australian soil since 2015.

Halestorm have toured extensively with a diverse variety of artists, including Eric Church, Avenged Sevenfold, Alice Cooper, Rob Zombie, ZZ Top and Evanescence – and were here last earlier in 2019 for Download Festival Australia – where they blew everyone off the stage.

They’ve played around 2,500 dates around the world to date, and performed at festivals like Taste of Chaos and Rockstar Energy Drink Uproar Festival. The band scored a Grammy for Best Hard Rock/Metal Performance in 2013, and Lzzy was named the “Dimebag Darrell Shredder of the Year” at the Metal Hammer Golden Gods Awards in 2016. Both Halestorm and The Strange Case of… were certified Gold, further evidencing Halestorm’s massively supportive fanbase.

Tickets for Halestorm Australian tour December 2019, presented by MJR Presents and now featuring NZ’s Villainy, are on sale now at mjrpresents.com (and are running low!) 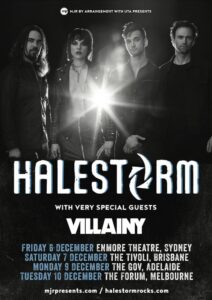