This past Saturday, Gordi performed at the Sydney Opera House to celebrate her new album, Our Two Skins. The show was broadcast globally as part of the Sydney Opera House’s digital program From Our House to Yours, which has featured archival performances by Jónsi & Alex Somers, Air, and Ólafur Arnalds, as well as live sets by Alaska Orchestra, Low Life and Bow & Arrow, streamed online to audiences around the world while the venue’s doors are temporarily closed. Performing a full set with her four-piece band, this special one-off event was Gordi’s debut performance at the iconic venue, recorded and streamed in full broadcast quality from the famous Joan Sutherland Theatre stage.View performance HERE.

Watch Some Behind the Scenes

‘Payten finds beauty anyway, never ignoring her fears, but remembering why the fear is worth braving at all.’ – Pitchfork

‘[Our Two Skins] balances fierce intimacy with expansive ambition… The resulting piece feels like an honest, personal reckoning, where both the artist and listener can join each other on the journey and emerge as better versions of themselves on the other side.’ – Uproxx

‘The album’s greatest strength is Gordi’s ability to render intimate details into poetic, evocative lyrics… Gordi stands out from her peers on the strength of her direct, melancholic voice and honest lyricism.’ – Exclaim

‘Payten herself is a magnetic presence’ – The Guardian

‘A majestic-sounding thing, Gordi’s commanding, Fender-thrashing performance was one to make all of us at home feel better about the uncertainties we face.’ – Sydney Morning Herald 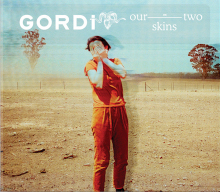