Following the success of their recent album Sanctuary, which was described by The Line of Best Fit as being “bold, daring and dazzling with sheer pop excellence”, Gengahr have today released an acoustic EP of some of the LP’s stand out tracks. Featuring the single ‘Heavenly Maybe’ which saw huge support from triple j, BBC Radio 1, BBC 6 Music and Beats 1, the stripped back EP is a beautifully crafted package, with additional backing vocal, strings and piano.

The band’s front man Felix Bushe explains, “lock down gave us an unexpected opportunity to reimagine some of the songs off our new record. It was a really interesting process stripping down our most built up production to date and seeing how the songs would exist in this new form”.

The band recently released their brilliant cover of Kendrick Lamar’s ‘LOVE.’, which they had originally performed live from Maida Vale Studios in session for Annie Mac on BBC Radio 1. The release coincided with the weekend Gengahr would’ve been playing Glastonbury Festival, of which Kendrick was scheduled to headline.

Expansive and ambitious, Sanctuary was released at the start of this year. A DIY triumph, it welcomes old friend Jack Steadman of Bombay Bicycle Club as producer, adding his distinct brand of symphonic sparkle to the North London band’s complex, layered sound and pushing them further into all-out pop territory. Born of an epic journey and taking inspiration from Homer’s Odyssey, the follow-up to their acclaimed 2015 debut A Dream Outside and 2018’s Where Wildness Grows sees songwriter Felix tapping into personal pain but coming out fighting.

“Gengahr release an album that is bold, daring and dazzling with sheer pop excellence. It packs in a full bag of human emotion eloquently and sophisticatedly”
– The Line Of Best Fit, 8/10

“A monumental shift in the right direction – it’s a record that is boldly more expansive and electrifyingly curious” – Dork, 4*

Sanctuary is vibrant, intoxicating, intimate and alive; the product of friends having a good time and seizing control of their own destiny. It is a heartfelt, sophisticated body of work that runs the full gamut of human feeling, with a positive ending in the form of the beautiful, twinkling ‘Moonlight’ – a harmonious conclusion of unison and togetherness, hinting at a bright future. 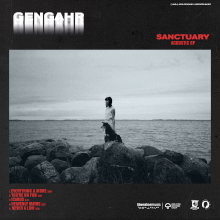