FRANK IERO AND THE FUTURE VIOLENTS

REFLECTS ON BARRIERS AND CELEBRATES

“From fatherhood to reckoning with life-long regrets to existentially questioning whether he really did make it,Barriers is a breaking down of the walls he built to protect himself from the most trying tribulations he’s ever dealt with. It’s also his most sonically diverse and musically risky record yet.”  – Billboard

“Three albums in, Iero has made huge strides in his evolution. Lyrically dense and sonically expansive, Barriersis a deeply gratifying and fully engaging listen that tempers suffering with just enough hope to keep going.” – AllMusic, 4.5/5

“Barriers is filled with hat-pin turns both sonically and emotionally.” – Alternative Press

“Introspective but riff-heavy.” – The Boston Globe

In the midst of international sensationalism and associated chaos theory, (past, present, and future) Frank Iero has always found sanctuary in one place and one place alone. His basement.

Hot off the heels of some BIG announcements pertaining to his ‘other job’ and in cellabration of his most accomplished and successful work to date – the critically-acclaimed 2019 Steve Albini recorded double opus Barriers (out now via UNFD) Frank opened up his inner sanctum home studio to a camera crew in order to document a visual representation of the most personal track on the album: Basement Eyes.

A true look beyond the candelabra, the Basement Eyes video is a fascinating insight into the pscyhe and process that Frank utilizes in creating music. Featuring studio reels, recording notes, tape mixes and title boards from the actual recording of Barriers, the grainy “heart on the sleeve” celluloid also features never before seen documentation of Frank’s ever expanding collection of instruments, guitars, pedals and most importantly fan art gifted to him over the years that adorns the walls of his home.

“We are proud to present you with our latest music video,” says Frank excitedly. “It was directed by the talented David Brodsky and Allison Woest for My Goodeye Visuals. This song is very much about beginnings and ends. Many incredible feats have begun in a basement or a garage. I personally have started almost every musical or creative project of my career in a basement somewhere,” he continues. “I have learned to play instruments, started bands, painted, filmed videos, played shows, written and even recorded records there. It is my preferred creative space and the nucleus of where inspiration and ideas get formed into living, breathing pieces of art.”

When speaking about the song itself, Frank says, “The song ‘Basement Eyes’ was written in a basement. It’s about the feeling you get when starting something new and the fire that burns inside the creative mind. That fire pushes us forward. It urges us to continue making things not for the hope of fame or glory or the pursuit of monetary reward, but because it is a necessity for survival. The saddest thing about getting older is watching that fire go out or dull in other people’s eyes. Living a creative life, we tend to gravitate towards other likeminded people. Real recognizes real. Sometimes you start bands together or collaborate in some way. Sometimes just being around one another is enough. Even though these partnerships may be fleeting, you tend to continue in a strange orbit, occasionally meeting again somewhere along the way. Time passes, life happens, and I have seen people I hung out in basements who neglect their fires. Like a body needs vitamins and nutrients, our souls need to create. When that fire is extinguished, the hunger dies. ‘Basement Eyes’ is a song about that experience. Enjoi.” 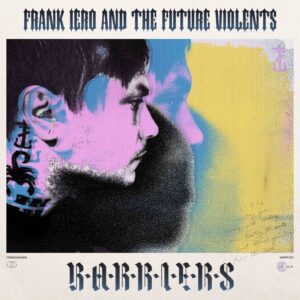 Barriers is a rumination of sorts on life and living and the obstacles that get in the way. Recorded and mixed by Steve Albini (Nirvana, Pixies, PJ Harvey), the album is 14 songs that not only tackle the existential journey of his heart and mind, but help him redirect his musical path. idobi Radio said of the record that, “Barriers is complex, messy, and, above all, therapeutic. What better way is there to face your demons than with someone who’s been through dark times and is armed with a guitar and a mic?”Meanwhile INKED said, “For a band whose name is forever changing and evolving– yet growing together– their discography follows suit.”

“I never expected to do one solo record in my lifetime, let alone three,” Frank laughs. “Every time I start a new record, I say to myself ‘This is it. This is the end. This is the last one.’ It got me thinking about how we set up these obstacles around ourselves. Sometimes they’re for protection and sometimes they’re to keep people out, and sometimes we even set them up so that we fail and we find solace in that failure. But whenever I find something that scares the shit out of me, that’s when I know I have to do it! And so these songs are about experiences that were either walls I wanted to break down or walls that I’d built up around myself in order to protect myself. But these songs were also things that I’d never attempted before but had always wanted to try.”

Barriers is out now via UNFD. Stay tuned for more info regarding Frank Iero & The Future Violents in the future.
BUY  BARRIERS HERE