Melbourne’s FLYNN EFFECT are back in 2021! They return from a 2020-sized absence from the scene with the first taste of the record they wrote and recorded last year, a planet-sized song called ‘Andromeda’. The track will be released today February 19 – available at https://ditto.fm/andromeda-flynn-effect.

Vocalist, Tomina Vincent, said that “We wrote Andromeda in 2020, while the whole world was in chaos. Amid the fear of what was to come and the social unrest, we wanted to imagine a world where solidarity and togetherness are commonplace and the bedrock of our human experience. We are in the midst of a transformation – our way of life and the structures designed to operate in our world are evolving for the first time in this generation, as it finds its voice and what it stands for. Fighting for change and breaking down the divides that separate us is the most important thing for us as a species, as we try to rebuild and create a future we can be proud of.”

Continuing about the single’s intentions and themes, Vincent said that “We wanted to bring a sense of hope and focus on the realisation that even if we are frightened of this change, even if the fight is difficult and never-ending, and the prospect of reimagining our way of life is intimidating, many voices are rising, and we are not alone. Andromeda is that alternative world, where we forget countries and borders, and we come together as one entity, whose mission is to create a world of balance and peace.”

Flynn Effect are celebrating the release of the new single with a launch show at Forge Metal Nightclub on Saturday March 13 – which is held at Melbourne’s STAY GOLD. Joining them for the night is Treebeard and Colour & Shade. Tickets are $25 and are available now at EVENTBRITE.

Drowning in LED’s and wielding glowing instruments, Flynn Effect’s ambitious live performances have seen the band share the stage with rock and metal royalty, including The Tea Party, Lacuna Coil, Seether, Lindsay Schoolcraft (of Cradle of Filth), Wednesday 13, and Davey Suicide, local heavyweights Orpheus Omega and Osaka Punch, as well as take the stage at the 10th anniversary edition of Progfest in 2019.

Drawing influences from Coldplay to Birds of Tokyo, via Devin Townsend and Karnivool, the band concocted a blend of seemingly incompatible elements into a whimsical music burrito. In the six years since their inception, self-managed and self-produced (in a bedroom), Flynn Effect have released two studio albums – Skin in 2015 and Obsidian in 2017, followed by the 2018 release of their EP Monument and the 2019 Covers EP Giants, making the latter their 4th release in 6 years. 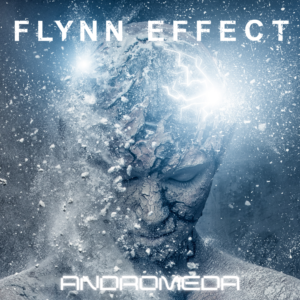 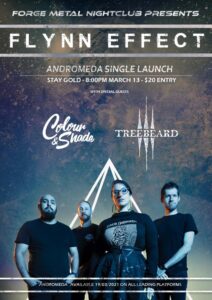