Frontier Touring are stoked to announce 35x time ARIA nominees and 11x time ARIA Award-winning trio Eskimo Joe will return to the stage for seven theatre performances across Australia in March/April 2022. For the very first time, the band will be playing their iconic albums Black Fingernails Red Wine (2006) and A Song Is A City (2004) back-to-back, each in their entirety… with a few surprises up their sleeve too.

Says lead singer Kav Temperley:
“We are super excited to announce that we’ll be hitting the road in 2022 and playing our albums A Song Is A City and Black Fingernails, Red Wine in full, back-to-back.
We’ve had this planned for quite some time but were unable to go ahead due to Covid outbreaks and restrictions. So, in the interest of wanting to give our fans something to look forward to after this crazy year we’ve just had, we’re announcing our 2022 tour now. This gives us a chance to plan a really spectacular show!
Some of these songs have never been played live before, but every song on each of these albums means so much to us and signifies such an important time in our lives and our career as a band. We can’t wait to relive them all with you.”
Eskimo Joe below 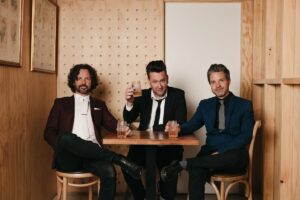 Today’s announcement coincides with the release of the band’s brand new single, ‘99 Ways’ (out now via Ditto), a track dubbed by Temperley “an isolation love song”. Live on stage in early 2022, fans can expect a show featuring A Song Is A City hits such as ‘From The Sea’, ‘Smoke’, ‘Older Than You’, ‘Life Is Better With You’, as well as belters from Black Fingernails, Red Wine, such as the title track, ‘Sarah’, ‘New York’, ‘Breaking Up’, ‘London Bombs’ and many more!
Listen: ’99 Ways’ below
99 Ways’ is the latest single from the acclaimed trio, and the first taste in new music for some time – keep an eye out for the new video, dropping 22 February. In 2020, Eskimo Joe released ‘Say Something’, their first single since 2013, the track reaching #1 Most Played on Triple M and 11th Most Played song on the Australian Airplay chart.
In response to the release of ‘Say Something’ Rolling Stone AU wrote, “Their new single sees them refreshed and more powerful than ever, with Kav Temperley describing the song as ‘a call to act with humanity, without prejudice or violence towards each other or the planet’”. The band also performed a special version of ‘Say Something’ on ABC TV’s The Sound, recorded live from Perth Concert Hall and Port Melbourne.
Eskimo Joe will kick off their tour at Perth’s Fremantle Arts Centre (South Lawn) on Saturday 5 March, 2022, before heading to Adelaide’s Thebarton Theatre on Saturday 12 March. Next up is Hobart’s Odeon Theatre on Saturday 19 March, before they head across to Melbourne’s Forum on Friday 25 March, and up to Anita’s Theatre in Thirroul on Thursday 31 March. Rounding out the tour is Sydney’s Enmore Theatre on Friday 1 April, 2022, before finishing up at Brisbane’s Tivoli Theatre on Friday 8 April, 2022.
VIDEO: ‘From The Sea’ by Eskimo Joe

Fans can sign up to the Eskimo Joe mailing list no later than midnight Monday 15 February in order to access an Artist Pre-sale on Tuesday 16 February (starts 1pm AEDT). Frontier Touring members can also access the Frontier Presale (same time, see below info). 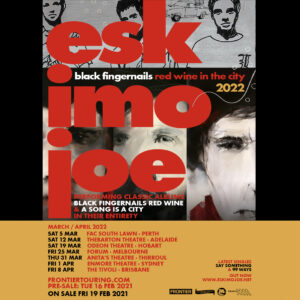