Following his debut release ‘All Of You‘, ‘Venus de Milo‘ navigates the everyday trials and joy of love with exceptional regality and intriguing mystique together with the warmth and familiarity of Midlake and The National remade into a vision of his own.

Of the track, Irish shares, “So much writing about love focuses on the beginning or the end of a relationship – Venus De Milo is about the day-to-day, which I think is so much more nuanced and interesting. Love has no arms, it can’t walk on its own, and we need to help it along the way.”

Rolling bass, open-road synths, and desert dive piano come together somewhere in between The Flying Burrito Brothers and the Twin Peaks soundtrack. Joined on the title track by his wife and musical collaborator Madelaine Lucas (daughter of Steve Lucas, singer of acclaimed Australian punk band X), Me & Baby hurtles through a landscape of gritty romance, menace, and desire with all the energy of a young couple on the run.

‘Venus de Milo’ by Robert Irish is out now, buy/stream it here. Official EP artwork below 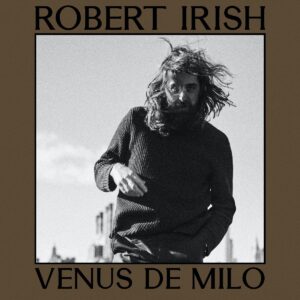