EAST CAPRI ARE BACK

Brisbane up-and-coming alternative duo East Capri are back with their sophomore single, “Liberate“, ahead of their release of their forthcoming EP, ‘Wake n Repeat‘, out Friday August 27.

Produced and recorded by one half of East Capri, Jackson Deasy, and mixed and mastered by Lance Prenc (Alpha Wolf, Polaris), “Liberate” is about finding your own identity and chasing a passion path curated by only you with risks, or choosing a safe path chosen by others. “Both of these paths are wildly different in every way which creates a very unsupportive and demeaning environment when expressing your dreams and aspirations,” explains the band. “‘Liberate’ represents a situation in which the time has come to make a choice, a safe and simple life with so called “guaranteed success”? Or taking a risk and chasing your dreams and passions?”

“Wake n Repeat” made its entrance a few weeks ago as the duos debut offering and the first single from their upcoming EP of the same name. “Wake n Repeat” was welcomed with a radio exclusive at Triple M Hard N Heavy before their postmodern inspired video by Third Eye Visuals premiered exclusively at Hysteria Mag. The single made its television debut on the Channel 7‘s Friday Night Football on its day of release, has had a spin on triple j’s Short. Fast. Loud and has cracked close to 20,000 views on YouTube.

Forming in regional Queensland, Eden Cartwright (vocals) and Jackson Deasy (guitar) make up East Capri, a product of shared musical interests and influences which in turn have built the foundations of the Brisbane duo. Taking inspiration from bands to the likes of Bring Me The Horizon, Twenty One Pilots, Slaves, Falling In Reverse and I Prevail, East Capri pool their collective influences together and endeavour to produce music with feeling and to create connection. Forthcoming EP ‘Wake n Repeat‘ shares a delicate side to the band that has culminated in an honest and cathartic release.

“This record shows a deep side of tragedy and pain, and through the writing process we really grew a strong bond not only as a band but as lifelong friends” explains Cartwright. “Writing and creating was the biggest factor in helping us cope through some seriously tough and isolating times.“

The band take on a DIY approach to their music, with each track fully written and produced in house. Over the span of four years the trio have found their footing and are ready to unleash their carefully crafted collection of addictive melodies and infectious grooves.

East Capri strive to grow and evolve with each offering. Stay tuned for the next chapter. “Liberate” and “Wake n Repeat” are available everywhere now at https://linktr.ee/eastcapri. ‘Wake n Repeat’ EP will be out Friday August 27. 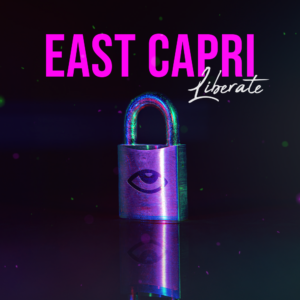