FOR ‘STUPID IS AS STUPID DOES (FEAT. K.FLAY)’

Working alongside best mate and producer James Tidswell (Violent Soho), engineer Mitch Kenny, producer/songwriter Miro Mackie and mixer Mike Green, Hurry Up And Wait marks a new chapter for the band. Featuring the previously released singles ‘Crazy’ and ‘No Plans’, both of which received full rotations adds on triple J, Hurry Up And Wait is Dune Rats’ cleanest and most mature release to date, seeing the trio evolve while also honing their beloved brand of raucous, anthemic 90s skate-punk. And while they might write about new life experiences and exploring new musical styles – they can’t just be that ‘Scott Green’ band forever – the band proves just as tongue-in-cheek and down-to-earth as ever. Above all, Dune Rats are just always trying to keep it real, no matter where they are in life.

Of the album, drummer and backing vocalist BC Michaels says: “This is our favourite album we’ve ever made. It took a few years to get it together but we got to go to a bunch of cool places and we are super proud of it. We’d be stoked if other people like it as much as us”.

The bands’ third record is their first since the breakthrough success of their 2017 record, The Kids Will Know It’s Bullshit, which landed four singles in triple J’s Hottest 100 between 2016 and 2017, debuted at #1 on the ARIA charts, was nominated for ‘Best Rock Album’ at the ARIAs and saw the trio taking their explosive live show to larger and larger crowds at sold-out headline shows around the world and at home with headline slots at Splendour in the Grass, Falls Festival, Laneway Festival and more.

Fans will get the chance to see Hurry Up and Wait performed live for the first time when Dune Ratsembark on their national album tour, starting on February 29 in Adelaide, before moving on to Perth, Brisbane, Sydney and Melbourne. Joined by a stacked cast of supports, including the endlessly witty and charming Ruby Fields, Australian grunge figureheads Dear Seattle and Wollongong-based three-piece TOTTY, the Hurry Up And Wait tour is sure to up the ante on the band’s previous tours, bringing their infamous party vibes, crazy antics and communal atmosphere – but on a bigger scale than ever before. See full dates and details below.

Hurry Up And Wait is out now via Ratbag Records/BMG,
buy/stream it here. 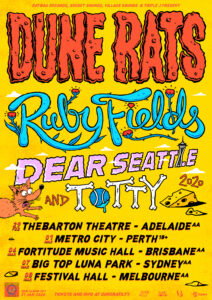