NOTHING LEFT TO LOVE B-SIDES

Hamlton hardcore rockers Counterparts have released a collection of B-Sides from their 2019 release Nothing Left To Love featuring two new songs, Purer Form of Pain and Strings of Separation.

“One person’s trash is another person’s treasure… so here’s 2 more b-sides I guess?,” shares the captivating and hilarious front man Brendan Murphy. “We wrote these songs when we were in the process of recording Nothing Left To Love and for whatever reason, they just didn’t fit the vibe of the album so we decided to cut ’em. Since you guys seemed pretty stoked on the Private Room EP we figured why not just throw these up? At the very least, it’ll occupy like 5-10 minutes of your time… and who knows when the 5 of us will even be able to cross the border to be in the same room and record more music? You might love them, you might think they stink, either way it’s all good by me. They’re b-sides! Who gives a shit?”

Fans can stream Nothing Left to Love B-Sides HERE.
Nothing Left To Love, released November 1 via Pure Noise Records, gave the band their best first week sales of their career. landed the #1 spots on the Current Hard Music and Record Label Independent, #4 on both the Current Rock and LP Vinyl, #5 Internet, #11 Top Current, #13 Billboard Top, #16 Current Digital and #17 Digital Billboard Album Charts while securing a spot in the Billboard Top 200 at #97. The album saw immense success in both the streaming and traditional album sales categories, proving that Counterparts are at the top of their game.

The sixth full-length album from Counterparts shows the band moving their uniquely captivating sound forward without losing the musical DNA that broke them back in the early 2010s. Produced by Will Putney (Every Time I Die, The Acacia Strain), the album muses on many of the topics vocalist Brendan Murphy has in the past: life’s darkness, self-destructive tendencies and the self-flagellation they beget. Not only does Murphy himself come full circle, but the album found Counterparts welcoming former guitarists Jesse Doreen and Alex Re back into the fray to aid with the writing process. For all parties, the homecoming was cathartic and meaningful.

Nothing Left To Love is available to stream and purchase here. 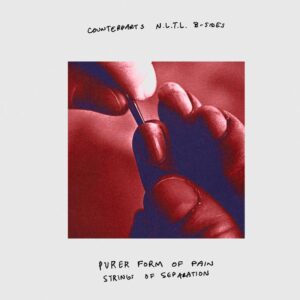