Sharing a deep special dance cut today Commandeur and KLP have united for their first song together ‘Feel The Love’, a powerful collaboration made in isolation. Made on the last day before lockdown due to COVID-19 took place, KLP really wanted to capture that moment on the track, “We decided to try and write through the craziness and make a song that you could cry it out on the dance floor too.” The pairs long history in music really helping them come together for the track, Commandeur saying “Kristy and I have been friends and live music collaborators for a long time so getting in the studio together has been a long time coming. We were still wrapping our heads the start of the pandemic in Australia as everything was shutting down around us and restrictions were coming in to place – little did we know that our session would be the last outer-house interaction for us (aside from essential outings).” The production on ‘Feel The Love’ also a combination of their styles, Commandeur saying, “From a production standpoint, given our history together in the club and KLP’s knack for writing killer dance tracks, I leaned into more house inspired elements to bridge our musical worlds and create something that bang and makes you want to move.”

The artwork for ‘Feel The Love’ was created by Australian artist Mark Harding in collaboration with Commandeur and KLP, after Mark started a COVID PSA Series of artwork on his Instagram. Mark saying, “Whenever I see two aeroplanes in the sky I think of the phrase ‘two ships passing in the night’ – how close all of those passengers are for a brief moment before they arrive worlds apart. There’s something really lonely about that idea to me. Isolation has made me (and many other people around the world) suddenly very tuned in to the concept of loneliness. It’s what made me start illustrating my COVID PSA’s, I wanted a feeling of togetherness and support during a time of uncertainty and isolation. Kristy shared this feeling and after reaching out in support of the illustrations, asked if I wanted to conceptualise some artwork for her latest collaborative single. In a time where artists and musicians are out of work and isolated it was inspiring to see so many different voices and talents come together to create something with such a positive message.”

Commandeur has been at the forefront of the Australian music scene for over 10 years starting with the ARIA Award winning band, Operator Please. He has performed alongside the likes of PNAU, Tkay Maidza, Dua Lipa, King Princess but now taking the solo route with his drum kit in tow, Commandeur has been busy in studios from Sydney to LA with the friends and collaborators PNAU, Jesse Boykins III, Kira Divine, Mickey Kojack and more. Commandeur fuses his love of dance music with his band background, producing a refreshing electronic sound that has everyone paying attention. ‘Feel The Love’ is Commandeur’s second release for 2020 following on from ‘Nothing Else’ and his remix of Set Mo’s ‘See The Light’.

Feel The Love’ is KLP’s second release for 2020 following on her recent hit single ‘Energy’ which was added to triple j, NOVA nights and hit the top 5 shazam tracks in Australia. Her singles from her debut album including ‘Under the Influence’, ‘Heater’, ‘Push’ and ‘Giver’ feat Dena Amy have garnered hundreds of thousands of streaming and been featured in NMF UK, New Dance Beats and key US dance playlists, touring in support over the last quarter of 2019. 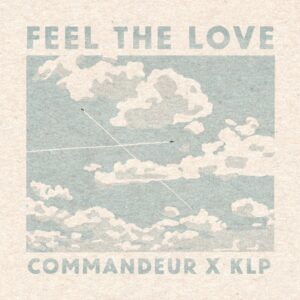