Emerging WA band Cloning have today released their ethereal new single All Rise, an introspective track that questions morality and is influenced by Nordic mythology.  The group have also released an impressive self-made cosmic claymation film clip to accompany the song.  To celebrate the release of All Rise, Cloning will be playing an exclusive show at the Indian Ocean Hotel in Scarborough on March 13.

All Rise pays homage to triphop auteurs Portishead while also evoking influences from Nick Cave and the Bad Seeds to Radiohead.  Recorded and mixed by Dave Parkin (Gyroscope, Karnivool) and mastered by Brian Lucey (Cage The Elephant, Arctic Monkeys, Royal Blood), this atmospheric track is the perfect soundtrack to a warm, hazy summer, with shining synthesisers, ample mandolin, cinematic guitar and idiosyncratic vocals.  Speaking on the intricate meaning behind the track, guitarist and lead vocalist Felix Parker says, “All Rise is about how groups of people can think their intentions are purer than they actually are, and end up committing morally questionable acts in the name of their chosen cause.  It’s also about what gets left in the wake of pursuing a goal and how noble intentions can be corrupted by the pursuit of this goal.  The imagery in the lyrics is influenced by Nordic mythology and stories about the Yggdrasil which is a mythical ash tree at the centre of the cosmos.  I read way too much as a kid and a lot of that just seems to naturally flow into my lyrics.”

Watch ‘All Rise’ below:

Following the Nordic mythology theme, the video for All Rise was cleverly and masterfully worked in-house by the band, from conception to completion, excluding the editing which was completed by Jake Crawford (Psychedellic Porn Crumpets). From set making, to directing, to filming – the band did it all.  With over forty hours of footage filmed over one very long weekend, and after almost setting fire to Felix’s living room twice, the video was taking shape.  “We wanted to create visuals that complemented the lyrics and the myths they were influenced by. We came up with the concept first and were trying to think about how we could pull it off. We thought about hiring an animator to make an animation video at first, but we couldn’t afford it. Bevan made stop motion videos as a kid and does photography in his spare time, so we decided to make the video ourselves using Claymation,” explains Felix.  “And we are really happy that we decided to do it ourselves because we ended up making something that is way more us than if someone else had done it,” adds guitarist Bevan Green, “But it definitely pushed the limits of our sanity. We spent ages gluing fake leaves to sticks to make trees which is really finicky when you’re dealing with things this small. And we had to be careful when filming not to move the clay figures in the wrong way or knock the camera, because one dodgy photo would ruin the hundreds of photos we had already taken up to that point for the scene.”

Cloning formed among friends Nic Rollo, Felix Parker and Jack Brett during their final years at school.  The untimely loss of a close friend and musician around this time drove them to invest heavily in their musical pursuits.  They were soon joined by guitarist Bevan Green, who grew up in the goldfields mining town of Kalgoorlie; joining the band when he moved to Perth.  Though in relative infancy, Cloning have already been notching up some impressive achievements – touring nationally and scoring a WAM Song of the Year nomination last year – it’s safe to say 2020 is set to be a big year for this talented alternative act out of Perth!

All Rise is out February 3. 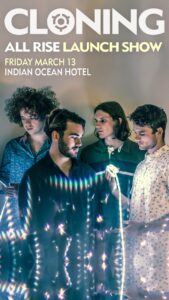