After losing an album that was a year in the making, the dissipation of a close-knit band and falling off a balcony and nearly dying, Charlie Gradon documents the bleak moments of a bad week while remaining triumphant on his new single ‘Grieving’.

Born in his bedroom studio, the nostalgic track builds towards emotionally charged chorus’ with gusto, before falling away to Gradon’s echoing, yet charming vocals. It’s a rolling ballad of heartache crescendoing in a resolved and hopeful outlook. Gradon reiterates “The final pre-chorus relates to a weird feeling of relief, of leaving and ‘walking home in bare feet’ not concerned with the future, but being hyper aware of a beautiful end to a heavy week.”

‘Grieving’ is the dreamy first track taken from his forthcoming sophomore EP out later this year which the multi-instrumentalist Gradon wrote, performed and produced entirely on his own.

This EP will follow 2018’s ‘Self Doubt’ which intrigued audiences and garnered on-air support from Double J and FBi Radio and had him named in The Music Writer’s Poll for ‘Song of the Year’.

Listen to ‘Grieving’ Below:

Echoing this praise, he was recently a finalist inHappy Mag’s Needle in the Hay competition out of 2000 entries, and named in Life Without Andy’s Next Big Things for 2020.

Off the back of supporting Sydney’s Brightness, Charlie Gradon will take his passionate delivery from the four walls of his bedroom to the stage as he launches ‘Grieving’ in Sydney and Melbourne this April. 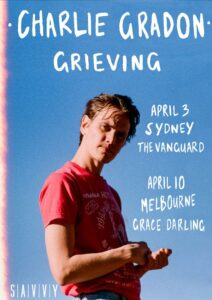