BY NIK BRUZZESE FROM

MAN OVERBOARD THIS IS COPING

Man Overboard’s Nik Bruzzese’s solo project, Casa Loma, has released debut EP, This Is Coping, out now. The six-track EP was recorded at The LumberYard in the New Jersey recording studio Nik shares with Ace Enders of The Early November.

Bruzzese shares about the EP, “I started writing this EP as a therapy session for myself. I went through one of the hardest years of my life last year because I lost two people very near to me. But when you’re a dad and have two daughters like I do, you’re not allowed to be sad. You have to be excited and happy about everything, even though inside you might be ripping to shreds. I think that’s the way most people work; they have to put up this front like everything’s fine even though they actually think the world is falling down around them. So writing this album was a way for me to vent and get out those feelings without tearing somebody’s head off or being a perpetual bummer to my family and friends. It’s for everyone who has to be this one person during the day and then someone different when they’re on their own.”

While there are a few Man Overboard songs that teeter on the edge of acoustic-driven dream pop warmth, the stuff Nik Bruzzese tackles with Casa Loma wouldn’t quite fit within the context of his main band.

“I’m not like a ‘serious’ person by any means,” the vocalist, producer and multi-instrumentalist says. “I’m a very sarcastic Italian ballbreaker from New Jersey. But this record is the exact opposite of all of that.”

Nik lost more than one friend, back to back, in what he describes as “crazy, crazy ways.” Casa Loma provided an outlet for him to explore his feelings about the passing of his father, as well as Cold Collective singer and dear friend, Tim Landers of Transit.

“I don’t want to waste any time, because tomorrow isn’t promised,” he says. “I wished I had that letter in the desk, you know, ‘If you’re reading this, I must be dead. Just know that everything is going to be okay,”he says. 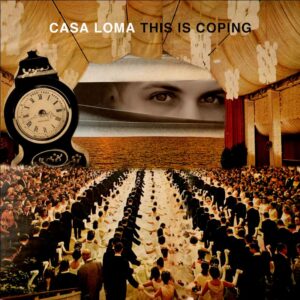 THIS IS COPING TRACK LISTING: