Boston Manor have today revealed the hyperkinetic music video for the first single from their newly-announced third album, GLUE. Everything Is Ordinary “is about how we’re desensitized to all of these major, major problems that exist in the world today,” says vocalist Henry Cox. “We’ve seen literally everything so nothing really strikes us as worrying or scary any more and, essentially, everything is ordinary to us. I was mostly thinking about the environmental crisis when we wrote this but it does apply to a lot of things that are happening right now.”

Watch ‘Everything Is Ordinary’ here:

Everything Is Ordinary sets the tone for an album that’s all about questioning the state of the world around us. Inevitably, in a critical examination of modern constructs, it comes from a dark place but one that fueled the five-piece to create a body of work that elevates their craft further than ever before. During what singer Henry Cox describes as a “very chaotic” process came the 13 highly charged songs that make up this record.

“It’s a lot more abrasive and a weirder record,” says Cox when musing on the sounds comprising ‘GLUE’.“It’s just new territory for us. The whole point was to throw away any preconceived notions of what the band is and push ourselves out of our comfort zone.”

Like its predecessor Welcome To The Neighbourhood, GLUE was recorded at The Barber Shop studios in New Jersey, but with a very different approach to that record. Produced by Mike Sapone and engineered by Brett Romnes, Cox admits that these are not just the most primal and plain-speaking songs the band have ever recorded, but everything the previous seven years have been leading up to. “This is the start of our band finally becoming the band that we want to be,” he says. “It’s taken us so long to get here, but I’m really proud of us for becoming our own thing. Not once did we think about what people wanted to hear – we just went entirely down the rabbit hole with it. Our only rule was to do what we wanted to do. And I’m really happy that we did that.”

GLUE is a bold, outspoken and uncompromising record, one which Cox hopes will be a call to arms for everybody who listens to it – to make them realise they need to take notice of what’s happening both around them and on a larger, more global scale. “I want people to listen to it and feel something and think about things,” he says. “The aim of the whole record is to make people angry. It’s to make them go ‘Well, this pisses me off, how can I change it? What is one thing that I can personally do – that I can start doing today – to make a difference?’ Because we can do better than this. We just need to start.” 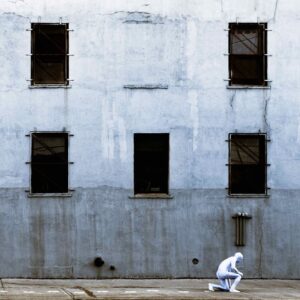