ON SOOTHSAYER ‘YOU DON’T KNOW’

To tide listeners over until they can get their hands on a wax copy, BODY CORP shares his first single from the release ‘You Don’t Know’, a delicious slice of no-fi house that incorporates mellow, celestial sounds that elevate the track to another sonic plane and was inspired by the foreign and unfamiliar soundscapes of Japan, during a trip Marco took some time ago:

“The track began with field recordings of a Japanese train guard’s announcements on the JR Line from Tokyo to Kyoto. Re-incarnated through experimentations in various Sydney studios and drawing influence from 90s acid house, ‘You Don’t Know’ was the beginning of what has become the Soft Expression EP. – BODY CORP

The rest of Soft Expression was formed from evolving sessions, drawing inspiration from the dedicated local music scenes in Sydney and Melbourne and often finding a moment after to record sections of songs, resulting in a beautiful collection of house tracks that lean heavily on the sounds of the 90s and Marco’s love of the late night, while parading a distinct modern touch. Across four silk-laced originals (and one mind bending remix from Francis Inferno Orchestra – exclusive to the 12”), there are smudgy fingerprints of musical introspection. 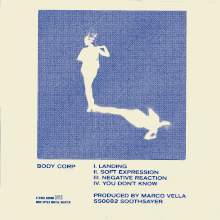