BATZ RETURN TO THEIR

Returning like a much needed beam of light amidst the darkness that has been 2020, Melbourne’s BATZ deliver another cracking tune in ‘Remain The Same’. For those who have been following the band’s journey from the beginning, this new single marks an exciting new statement of intent while for newcomers, the single is one helluva introduction.

Sparked up and charged with attitude, ‘Remain The Same’ is the band’s first release for 2020 and an example of the tightness of BATZ’s musicality. Having defined their sound over a successful few years of music releases and shows, BATZ have established themselves as one of Melbourne’s favourite live bands.

Watch ‘Remain The Same’ below

‘Remain The Same’ was recorded at Abbotsford’s Aviary Studios with Alex Markwell (The Delta Riggs, Hayley Mary) on mixing and Brian Lucey (Arctic Monkeys, Liam Gallagher) on mastering. The result is a biting tune that sits well in the same realm as music by artists like The Kills, DMA’s and Primal Scream. The builds are big, the vocals hypnotic, the rhythms driving. “‘Remain The Same’ is a nod to 90’s rock ‘n’ roll psychedelia. The song touches on themes of people’s experiences in toxic relationships. No matter how hard you try to work for that relationship or mold it, the relationship remains the same and sometimes it’s best you find your own path to walk and let what holds you back, go.” BATZ

Adapting to life in lockdown, BATZ have been using their time off the road to invest in creating more kick ass sounds that reflect the rollercoaster of a year that has been 2020. As songwriter Christina Aubry recalls, the experience has been like starting all over again. “We were lucky enough to have support from the City of Melbourne with grant funding, which took a lot of financial stress off the process as an independent band and helped us focus on the song and creative part – which is the most important and fun part!” Christina Aubry

Along with the release of ‘Remain The Same’, BATZ were able to get a music video together despite Victoria’s current state of lockdown, compositing footage shot by the band themselves at home before Will Patston edited the final result. “We did a lot of it on our iPhones and used stock footage to come up with an iso lo-fi clip. This wasn’t the plan but again the ‘Rona is railroading everything, you gotta roll with it and make the most of what you have!” BATZ

“Hell this is so fun, Batz! Got that old school Le Tigre-like shriek of excitement about it.”
Triple J Unearthed, Dave Ruby Howe (‘Wizard’)

“Charming, rambunctious, punk-tinged and irresistibly danceable…feels like the millennial love child of the Yeah Yeah Yeahs and The B-52’s, so yeah, you know it’s a good time.”
Music Feeds (‘Wizard’)

“…new wave percussion and guitars, plus some restrained by shimmery synth stabs to transport you straight to the energetic streets of the UK capital.”
Pilerats (‘Save Us’)

‘Remain The Same’ is out now | Official Single Artwork Below 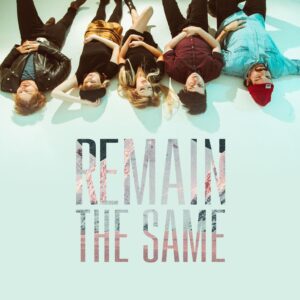