Frontier Touring is over the moon to announce the return of British pop superstarsBastille to Australia and New Zealand at the beginning of next year on the Doom Days Tour, Part 2. Visiting Auckland, Sydney, Melbourne, Adelaide, and Perth in January and February 2020, this tour will be fans’ first chance to hear the band’s third studio albumDoom Days performed live.

Kicking off in Auckland on Thursday 23 January at Spark Arena, Bastille will head across the ditch to the Gold Coast on Saturday 25 January, taking on Sydney’s Hordern Pavilionon Monday 27 January, Sidney Myer Music Bowl in Melbourne on Thursday 30 January and AEC Theatre in Adelaide on Sunday 2 February, before wrapping up the tour on Tuesday 4 February at Perth’s HBF Stadium.

Frontier Members will have early ticket access in their 24-hour pre-sale from Thursday 13 June (2pm AEST/2pm NZST), before tickets go on sale to the general public on Monday 17 June (10am local time – AU shows/12noon NZST).

Bastille’s third studio album Doom Days drops on Friday 14 June via EMI Music Australia (pre-order here). Featuring the massive first single ‘Quarter Past Midnight’, title track‘Doom Days’, latest single ‘Joy’ (and its hilarious video clip), and the freshly-released new cut ‘Those Nights’, Doom Days is their most confident record yet. It tackles many of today’s most pressing political and social issues, while maintaining a personal angle throughout. Lyrically provocative and sonically diverse, it draws on influences in gospel, house, R&B, and more, as well as incorporating instrumentation inspired by their acclaimed ReOrchestrated tour.

“It’s a dance record but on our terms,” Dan says. “I’ve called it an apocalyptic party record but a party for us is all-nighters with your mates, not popping bottles in the club. It’s very British: rough around the edges.”
Recorded throughout 2018 in their South London studio, ‘One Eyed Jack’s’, by Dan Smith with bandmates Kyle Simmons, Will Farquarson and Chris ‘Woody’ Wood, plus producer Mark Crew, it sees the Grammy-nominated, Brit-winning four-piece stretch out and open-up like never before.
‘As pessimistic as it sounds, if this is the end of days we want to be in Bastille’s bunker, dancing to their anthemic stadium bangers until the bitter end.’ – MTV

The four-piece’s debut album, 2013’s Bad Blood, landed immediate traction with fans, shifting over a quarter of a million units in their homeland alone thanks to the multi-platinum mega-hit ‘Pompeii’ and singles ‘Flaws’ and ‘Laura Palmer’. 2016’s Wild Worldcontinued the trend, giving the band a second #1 album in the UK with tracks such as‘Good Grief’ and taking them from quintessential alternative popsters to festival favourites in just a few years. They recently shook up their live set with an orchestra and gospel choir on their audacious ReOrchestrated Tour and released the fourth instalment in their freewheeling mixtape series, Other People’s Heartache.Bastille have sold more than 8 million albums and racked up global streams well over the 6.5 billion mark, making them one of the most streamed acts on the planet, consistently sitting in the Top 100 streaming artists in the world (currently at #54). Recent Marshmello collab ‘Happier’, which they performed in Times Square on New Year’s Eve, is now certified Platinum in the UK and 5x Platinum in Australia, having spent a full 6 months in the top 10 of the US Hot 100 chart. ’World Gone Mad’ saw them contribute to the Netflix film Bright, starring Will Smith.

Now, they’re bringing the party to us. Don’t miss your chance to see Doom Days in the flesh this summer – tickets will not last long.

Patrons are advised to purchase tickets only through authorised ticket sellers.
We cannot guarantee any ticket purchase made through any means other than
the official ticketing agents listed on the Frontier website. 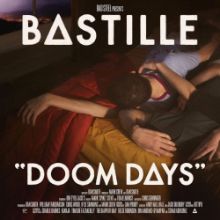