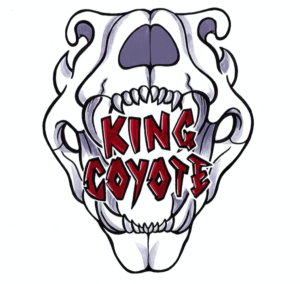 Australian rockers King Coyote have today announced their killer new single Coca Cola, an energetic romp inspired by chasing true love, out today. Coca Cola is the first taste of the upcoming King Coyote EP Wild, an absolute masterclass in rock n roll, set for release on November 1.  King Coyote will be heading out on tour throughout October and November, kicking off in Burleigh at Moe’s Desert Clubhouse on Friday October 4, then heading through Kingscliff to support Grinspoon, home to Port Macquarie for a series of shows, wrapping with a summer show on December 28 at Tacking Point Tavern (Port Macquarie) supporting Thirsty Merc.

Coca Cola is for fans of true, classic rock n roll; the kind of song that makes you want to slam your empty glass on the bar and head straight to the dancefloor.  Evocative of rock auteurs Queens of the Stone Age, Them Crooked Vultures and Jet, Coca Cola is overflowing with heady guitar riffs and hooky vocals.  Speaking on the inspiration behind the track, lead vocalist Sunny Rowlands enthuses, “This song is a bit of old time rock n roll, a throwback with our twist.  Coca Cola was inspired by true love, about seeing the red flags and acting on it, before you lose too much time… or whatever the listener thinks it’s about really.  We like both!”

Wild is a diverse collection of rock music by a group of seasoned musicians who know exactly who they are and what King Coyote represents.  From the exhilarating opener Running Wild, to the affecting, emotive closer Diamonds, the EP is true to its namesake in every sense of the word – this music is undeniably Wild.  Produced by Michael Lynch (Jimmy Barnes, Midnight Oil, John Butler Trio), Wild meets the thematic golden trio – sex, drugs and rock n roll – head on, as Sunny says, “We’ve taken a bit of time with this EP, enjoying the road, the band bonding, the late nights, the long nights and all the in-between, helping us get the songs to the point that represents us truthfully as a band.  It’s taken a couple of years, but it was worth the wait for us – it shows how far we’ve come and how far we can go.”

King Coyote are set to perform tracks from Wild live throughout October and November, with a diverse run of headline shows and support slots alongside rock legends Grinspoon,Thirsty Merc and First Beige.  Revving up fans and letting them know what to expect, Sunny enthuses, “The shows will be high energy, loud, and in your face – like a shot of coffee with your Red Bull!”

Coca Cola is out today, October 3. Wild is out November 1