LIVE VIDEO FOR ‘RUN TO THE RIVER’

“[Run To The River] builds to a world-shaking reckoning on family, mental health, and childhood nostalgia. Recorded live at Linear Studios in Sydney and capping in at 5:24, “Run To The River” ultimately reveals itself to be a sprawling yet intimate number with a profoundly personal story behind it.” – American Songwriter

“There is a pretty clear Springsteen influence on ‘Run To The River’, but unlike certain others who worship at the Boss’ altar, Golledge doesn’t resort to mimicry, he just takes inspiration and channels it through his natural voice.” – Double J

“In true country music fashion, the audience was taken on an emotional journey of love and heartbreak. For the remainder of the set everyone (including myself) danced topless and carefree to the best honky-tonk country I’ve heard to date. You couldn’t wipe the smiles off people’s faces.” – Monster Children

It is with great pleasure that I OH YOU release Namoi, the debut EP from Sydney-via-Tamworth artist Andy Golledge. In celebration, Andy has released a captivating live video for debut single ‘Run To The River’ & will be playing two very special EP launch shows at Old Bar in Melbourne on Saturday 21 March and Sydney’s Lansdowne on Saturday 28 March.

Both a livewire and a gentle soul trapped in a 70s tuna fisherman’s body, Andy Golledge looks like your old man back in the day, sounds like Neil Young, with the energy of Springsteen, and a vulnerability all his own.

Across the six tracks of his debut release, Andy uses his finely tuned craftsmanship to explore themes of modern love, nature, vices, getting older and getting by. The first three releases off Namoi are the perfect introduction to Andy’s self-reflective candour & massive injection of heart; leaving you with a dawning impression that he could easily be one of the most honest songwriters in Australia today.

Andy’s debut single ‘Run To The River’ is a gentle yet rousing shot in the arm for a loved one, and an anthem for anyone struggling with mental health, assuring them that “you’re not alone”. The single premiered on triple j and saw immediate support from Consequence of Sound, Chorus & Verse, Elicit Magazine, Vents Magazine and Enigma. The track has since been added to full rotation on ABC Country Radio and has seen strong support from Double J, with additional playlisting across Spotify and Apple Music. It was followed up by the stunning ballad ‘When Your Mind’s Away’ and  second single ‘1170’ which has been added to rotation at Double J and seen global playlisting on Apple Music.

Safe to say, Andy wears his heart on both sleeves. And while Namoi tackles some classic themes, to channel the great Darryl Kerrigan, it’s what he’s done with it that really packs the sting. He has a finely-honed knack of putting words to some of the rawest and most vulnerable of our emotions. ‘Every Time I See Your Picture On My Telephone’ is a painfully relatable tale of obsession and lust, mistaken for love. As we all know, it’s hard to let the perfect person go, even harder to accept that there’s no such thing. And it’s exactly these sentiments that will make Namoi resonate so hard with so many.

Growing up fishing, skating and playing guitar in Tamworth, Andy’s early musical influences, like most of ours, reflected his parent’s record collection. Absorbing the art of storytelling from James Taylor, he was “singing sad songs before I was even sad”. It’s a notion he explores in ‘Blue’, a self-aware sad song that questions whether its purpose is to help its creator work through issues or to simply enable his wallowing.

Despite hailing from Australia’s country music capital, it wasn’t until Andy left, drifted awhile, and landed in Sydney that his love of the genre emerged. “It’s very nostalgic for me, I have a strong pull to the past. We have a strange tendency to idealise the past when the present isn’t easy”, thoughts which echo throughout tracks ‘1170’ and ‘Dreamin’ Of America’.

For fans that have been riding with Andy for years already, Namoi is an excruciatingly long-anticipated release. For everyone that’s new, welcome. Saddle up, give it a spin, soak it in, and definitely don’t miss the chance to catch this one live at his EP launch shows next month!

“Releasing Namoi is literally a release for me too. These songs are very personal and carrying the weight of that alone is taxing. Now it’s lifted, they can go and live their lives and I can get on with mine.”

“I just want to make songs that will remain when all is said and done.” 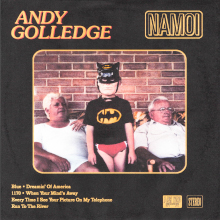