alt. took time to demo and experiment with their sound, reaching out to a number of fellow musicians for a hand in direction and production. ‘dysfunctional’ was produced by Callan Orr (Dream On Dreamer) at Avalanche Studios and the band has credited Trenton Woodley (Hands Like Houses), Luke McKenzie and Jimmy Alexander (Awaken I Am) and Zach Britt (Young Lions/Dream On Dreamer) for their contributions in helping create this massive debut offering. 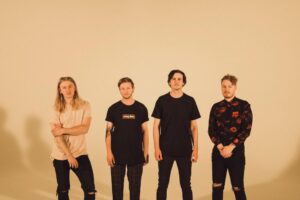 Check out some early reviews:

“Keeping me entertained for 25 minutes as a local band is a challenge but alt. pulled it off on dysfunctional.” – Backbone Takeover 8.6/10
“There’s undeniable talent here, and the production behind the EP is great, and I don’t think it’d take much to have this solid EP be an absolute knockout release that’d put alt. deservingly on the map.” – Depth Mag 8/10
“The production is impressive all over this EP and I really like the band’s use of electronic drum sounds and keyboard/synth sounds at various points throughout, showing their unconventionally fresh take on what would be expected from the ‘alt-rock’ genre.” – Rock N Load Mag 7/10
“There is a lot to like with alt., and, while I got more of a That’s the Spirit BMTH vibe than Deftones, I will be playing “nothingwithoutyou” on repeat starting April 24.” – The New Fury
Watch nothingwithoutyou below:
“insubordinate” marked the launch of the band and the first of seven singles to be released off of ‘dysfunctional’, followed by singles “chasing safety” and ‘nothingwithoutyou’. All singles have been welcomed with open arms with solid Unearthed reviews, plays on triple j’s Short. Fast. Loud, Unearthed’s TOPS, Triple M Hard N Heavy and rotation on The Faction as well as Spotifyplaylisting on both Homegrown + Heavy and Rock Out.
The day has finally come, “dysfunctional.” is out now and available at all digital stores and streaming platforms!