Written predominantly on the road where pool houses and kitchen tables were made into impromptu studios, in making Don’t Sleep Ivy strove to write music that could soundtrack both feelings of pure elation and move listeners emotionally. Challenging herself to experiment with new songwriting methods, explore the rawness of sound and collaborate with a broader range of voices, the result is a colourful journey made all the more vibrant and tender with tales woven from some of Australia’s most established and exciting upcoming voices.

Of the record Alice Ivy shares, “Don’t Sleep is a body of work that features an abundance of voices that need to be heard and are generally not heard from enough. Some of those voices belong to women, some are non-binary, some are people of colour and some identify as First Nations people, some are members of the LGBTQI+ community and all of them have important stories to tell. It’s been a privilege to create a platform where all of these voices can be heard through the medium of my music.”

Platforming new artists and helping new voices to break-through to the mainstream goes beyond just tastemaking for Alice Ivy, whose refined curatorial skills are on full display across Don’t Sleep. Through her choice of collaborators, Ivy is working to diversify the sound and look of the traditionally male-dominated studio space. This cause moves forward again through her second LP where Ivy is equally adept at uncovering new dimensions to those thought to be well established, household names such as Montaigneand Bertie Blackman on ‘Sweetest Love’, Ngaiire on ‘All For You, Thelma Plum on ‘Ticket To Heaven’ and Odette on ‘I’ll Find It’, as she is seeking out and breaking new ones including Imbi, BOI, and more across thirteen tracks.

Reflecting on ‘Ticket To Heaven’, Thelma Plum reveals: “Alice and I worked on this song shortly after the loss of a close friend, a musician I’d shared many stages with. I hope we’ve done his memory justice.” For Alice Ivy, “Ticket To Heaven is a very special song. I’d rented out an Air BnB in Sydney and set up a little makeshift studio in the living room. Although we have mutual friends, Thelma and I had never actually met prior to this session, so I was genuinely really nervous because I’m such a big fan of hers! Thankfully, we clicked! ‘Ticket To Heaven’ is about bereavement, in part relating to the sudden loss of a close friend of Thelma’s and someone who was much-loved within the Australian music community. I can’t think of a better way to honour someone’s memory than this utterly beautiful song. When I was tracking Thelma’s vocals I was almost tearing up due to the raw emotion in her voice.”

In the years between the release of Ivy’s Australian Music Prize nominated 2018 debut I’m Dreaming,. the curator has grown into one of Australian electronica’s most prominent advocates for female producers, putting her instep with tireless voices such as Grimes, Alison Wonderland and beyond. Now with the release of Don’t Sleep, with all four singles added to high rotation on triple J, and the title track the #1 most played song on the station in April, Alice Ivy’s position alongside respected contemporaries Mark Ronson, Jamie xx and KAYTRANADA is solidified, and her status as a revered collaborator confirmed.

Don’t Sleep by Alice Ivy is out now via Dew Process,
buy/stream it here. 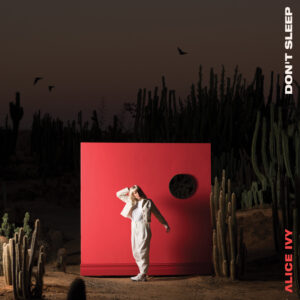