“She brings those fleeting summer vibes to life beautifully.”
Gorilla Vs Bear

“Easily one of the most talented in the game, layering samples, melodies and guest collaborators to give this woozy, Avalanches-comparable sound.”
Pilerats

Watch the fearless junior motocross riders tearing it up in the ‘Don’t Sleep’ video HERE.

Of the track, Alice Ivy shares: “Don’t Sleep is one of those songs that came out of nowhere! Imbi, Boi and I were in the studio on the last day of a songwriting camp (shoutout Ricochet!) and at the start of the session we were all feeling pretty burnt out. But something special happened between us and I think it had a lot to do with how inspired we were feeling after a week at an all-female/non-binary camp. We came up with a super powerful song and it’s definitely one of my favourite collabs I’ve ever been a part of. The lyric, “Our bodies are ours so keep your hands away”  hits me every time I hear it. It’s an empowering song… so obviously I had to recruit a bunch of junior motocross riders to tear it up in the video!”

‘Don’t Sleep’ marries the vibrant, organic production and Avalanches-inspired, collage-style of her debut record with a turn towards the contemporary, electronically-tinged alt-pop of Flume and Jamie XX, riding its combination of lofty, analog synths, tropical drums and bright guitars to a monumental chorus.

Like her contemporaries Mark Ronson and KAYTRANADA, Alice Ivy sits at the intersection of producer and tastemaker. A revered collaborator, she’s equally adept at uncovering new dimensions to those who you thought were well established, household names as she is seeking out and helping to break new ones. For Alice Ivy though, platforming new artists and helping new voices to break-through to the mainstream goes beyond just tastemaking.

Between releases, Alice Ivy has grown into one of Australian electronica’s most prominent advocates for female producers, putting her in step with other tireless voices such as KUČKA and Grimes. Through her choice of collaborators, many of whom are female and non-binary, Alice Ivy is working to diversify the sound and look of the traditionally male-dominated studio space – a cause moves forward again throughout her second LP. Across Don’t Sleep, her refined curatorial skills are on full display, as Thelma Plum, Ecca Vandal, Ngaiire, Benjamin Joseph of Safia, Odette, Bertie Blackman, Imbi and many more come together within Alice’s creative orbit. 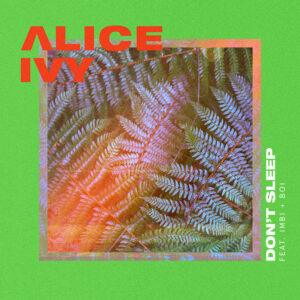