AJR have confirmed the release of their third full-length album, Neotheater, out April 26. The album was entirely self-produced by the brothers in their NYC apartment, with some portions recorded in LA. The twelve songs spin a coming of age tale that hears the band coming to terms with the sacrifices that come with growing older, now that the trio are in their twenties. The buoyant and uplifting music is juxtaposed with darker lyrical narratives that touch on anxiety, naiveté, and searching for integrity.

AJR kicked off 2019 with the release of an undeniable offbeat anthem, ‘100 Bad Days’. ‘100 Bad Days’ already has over 20 million streams, and entered the top 20 at US Alt Radio this week. The accompanying video saw the band performing the song virtually dismembered, incorporating surreal graphics and effects. Rolling Stone praised the video as “trippy”, and the song as “catchy, blending motivational pop vibes, light orchestral flourishes and more into a smooth whirl.” The band debuted ‘100 Bad Days’ on the outdoor stage of Jimmy Kimmel Live! last night – watch here.

Along with the album announcement, AJR have released a new track, ‘Birthday Party’, which features an eerie sample taken from David Lynch’s Eraserhead. The song’s tongue-in-cheek  lyrics live at the apex of wide-eyed inexperience, as the song is sung from the point of view of a one-minute old baby. Listen to ‘Birthday Party’ here. 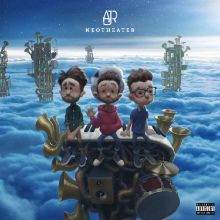