Australia’s pop-punk darlings Yours Truly have revealed the music video for latest single ‘Together’ today, which casts the band as video game characters.

It follows a huge few weeks for the four-piece, who upon announcing details of their highly-anticipated debut album ‘Self Care’, were revealed as the newest addition to Select Agency’s huge roster of clients, as well as the latest hand picked guest for triple j’s famed Like A Version segment. The band took on a huge cover of Oasis’ classic ‘Don’t Look Back In Anger’ last week and performed their own single and album track ‘Composure’ to feverish listeners. Check it all out below.

Watch ‘Together’ video below

After only a short few years on the scene – and out of high school for that matter – Yours Truly have earmarked themselves as one of Australia’s most striking rising stars. With tours alongside Sum 41 & Senses Fail, festival offers from the likes of Download UK, Riot Fest, Slam Dunk & Sad Summer and 9+ Million streams on their recent EP ‘Afterglow‘ already under their belt, Self Care promises to be another breakout moment for the four-piece.

The record unravels the momentous year 2019 was for the band, who in between incessant international touring were still dealing with all of the usual challenges faced at 21; uni, retail jobs and breakups, and leant on writing their debut album as a means to reflect and cope.

Yours Truly are due to tour their new album as soon as restrictions allow. Sign up to the band’s mailing list to be the first to know when! 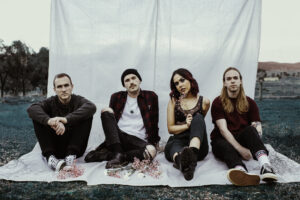