YEAR OF THE KNIFE ANNOUNCE

Hardcore upstarts Year Of The Knife have announced their upcoming debut full-length, Internal Incarceration, due out August 7th from Pure Noise Records. The Delaware-based band excels at crafting unrelentingly heavy, metal-influenced hardcore with deeply human and socially- conscious lyrics, and Internal Incarceration takes these strengths to new heights. Recorded by Kurt Ballou (Converge, Code Orange, Nails), the album sounds as raw and visceral as the subjects of its songs, which often find vocalist Tyler Mullen working through the challenges of loss, grief, and addiction with compassion to match the furor of the music. The album’s first single, Virtual Narcotic captures so much of what makes Year Of The Knife impossible to ignore. Opening with a vicious metallic riff, the song launches into a blistering lament of modern over-reliance on social media that culminates in an undeniably crushing breakdown. The band also shared a second song from Internal Incarceration, “Sick Statistic” a new version of a previously released compilation track that takes an empathetic view of the opioid crisis in America.

While Year Of The Knife’s lineup includes actual familial connections—the band is made up of Mullen alongside twin brothers Aaron and Andrew Kisielewski on guitar and drums, and husband and wife Brandon and Madison Watkins on guitar and bass—their approach to the band is rooted in the idea of chosen family. Year Of The Knife are motivated by an attempt to maintain control over their circumstances in the face of life’s many hardships, including the loss of family and friends to addiction. Madison explains, “Almost every straight edge person I know has been touched by loss. Those experiences can make you feel alone, but they’re something a lot of people within hardcore have gone through and can relate to. People that gravitate towards this music often have this darkness in their lives, but hardcore can be a beacon where they can find community and relief. It can be a really incredible outlet for getting that negativity out and finding people who understand you.” Internal Incarceration directly confronts that darkness, redirects it into music and lyrics, and provides the band with one of their most powerful traits: their ability to channel pain and aggression into something cleansing and connecting.

By its very nature, hardcore is a conduit for channeling frustration, aggression, and discontent into musical form. But for Delaware-based five-piece Year Of The Knife, that process is so much more than just a simple release. The band’s debut full-length Internal Incarceration is a profound reaction to the very real losses and the challenges of the world around them, and a way to turn that discontent into community, compassion, and change.

Internal Incarceration directly confronts that darkness, and redirects it into the music and lyrics. The album follows 2019’s Ultimate Aggression (a compilation of the band’s earlier EPs) and ups the ante in sheer heaviness and vitriol. Year Of The Knife teamed with producer/engineer Kurt Ballou (Converge, Nails, Code Orange) at Salem, MA’s legendary GodCity Studio, where he encouraged the band to push their sound without sacrificing the essential ferocity of their songs. “We’re definitely a hardcore band, but we have a lot of death metal influences, and Kurt helped to bring that out,” Brandon says. Madison adds, “We went in with a really open mind, and that only made the songs stronger and more dynamic.” The resulting thirteen songs clock in at a lean 31 minutes, and are Year Of The Knife at their most visceral. The fast parts are even more explosive, the breakdowns even more pummeling, and Mullen’s guttural voice cuts through the controlled chaos sounding energized and agonized all at once.

Mullen’s lyrics are often as crushing as the music on Internal Incarceration. Much of the album revolves around coping with loss, grief, and addiction—and the desperate need to vent these intense emotions. The title track directly addresses many of these themes and hits especially close to home for Mullen, who has lost immediate family members to addiction. “You can feel like a prisoner in your own skull,” he says. “It’s about feeling like you don’t have anyone you can confide in, like you’re trapped in your own mind.” Madison continues, “A lot of this record is about things that push you further and further back into yourself, like when you’re watching the people you care about suffer. I think this record was cathartic for every one of us, and will hopefully be that for those that listen to it as well.”

Internal Incarceration provides that in spades. Opening salvo “This Time” begins with a gut punch of groove-laden riffs before kicking into galloping verses that find Mullen lamenting the everyday callousness all around us. The song ends with only a moment of feedback before the album launches into “Virtual Narcotic”: a minute and thirty second barnburner of lightning fast guitars that contends with the lurking malevolence beneath our over-reliance on technology and carefully curated social media identities.

But Internal Incarceration is much more than unfettered rage. Songs like “Through The Eyes” and “Sick Statistic” are deeply compassionate looks at the opioid crisis in America, and reject judgement in favor of empathy. “I don’t think this country cares about addicts,” Mullen says. “It’s so easy to get your hands on these things, and then they just leave you there with no hope. These are sick people trying to get better.”

That humanity is a key part of Internal Incarceration. “Eviction” features a mind-melting heavy tempo change while shedding light on the enduring effects of an unstable homelife and being forced to grow up fast. And “Final Tears” is perhaps the closest Year Of The Knife come to an uplifting song. “It’s about perseverance over grief,” Mullen explains. “You can drown in it, but this song is about conquering that fear, and living.” The song is fittingly one of the most musically ferocious on Internal Incarceration, and highlights Year Of The Knife’s most powerful traits: their ability to channel pain and aggression into something cleansing. Album closer “DDM” taps into that communal release with a tribute to their home state and scene that supports them. “Hardcore helps to make sense of all the things you feel like you can’t control,” Madison says. “And finding community so you don’t sink beneath those things.” 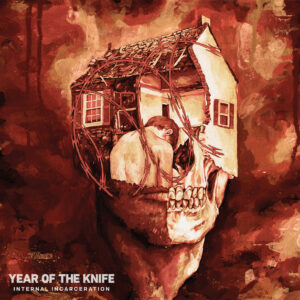 Year Of The Knife