Gather round, gather round and join this preacher and his misfits as this theatrical emo/rock/punk outfit, Wolf & Chain, present their 5-track, debut EP ‘An Honest Mistake’ (out June 5).

Since debuting in March, the band have released ‘Repent’ (released March 13) and the title-track of the EP, ‘An Honest Mistake’ (released May 1).

Listen to ‘An Honest Mistake’ below

These two explosive singles explored the horror/ thriller theme about the preacher (the antagonist) and his cult-like followers. They set the scene for the narrative that is told through the EP, but only scratched the surface with what the band had to offer.

The narrative of the EP explores the preacher who wants to mould the world into his vision by any means. He seeks refuge in the arms of a mysterious woman that promises a fix for his broken soul who transforms him into her own undead concubine. Unable to cope in the wake of his new existence the newly undead preacher embarks on a rampage ending himself and what he has become.

Front-man, Jack Cumes explains the moral and theme behind this story of the preacher:

“The narrative serves as a cautionary tale; how good and honest intentions can be manipulated by yourself and the world around you, turning you into the villain. Despite the bullshit, it’s important not to become a product of that hate and misery. It can consume you and destroy you if you let it.”

The EP opens with ‘An Honest Mistake’ with fast-paced, high-gained riffs, gutsy screams and timely full-band hits, the track quickly moves into melodic, harmonised guitar lines in the half-time pre-chorus before letting go in the chorus.

‘Murder Song’ follows, toeing the line between beautiful sweet sentiments and psychopathic tendencies about loving someone so much one could die. Amongst these volatile, overdriven riffs, Wolf & Chain make use of dropping the guitars in and out of the verses and finally erupting in a hardcore emo breakdown with a guitar solo before closing the song out with a solemnly gently Spanish acoustic ballad.

This bleeds into the extended version of ‘Repent’ that has an extra minute and a half intro of Cumes (The Preacher), performing a dramatic monologue that is a call to arms to his followers.

The EP is broken up by the interlude, a 5-minute emotional rollercoaster that opens with clean finger-picking on the guitar as Cumes showcases his extended vocal range. This passionate story continues as the band fall in and out alongside Cumes. After breaking down in a wreck, the band break out in emotional rage before closing with a settling string arrangement.

With the click of a switch, ‘Killer’ starts with upbeat stabs on keys. Filled with the preacher’s pain and anguish, Cumes melodically belts out how this preacher has been moulded into an undead concubine by this mystery women. In an unexpecting transition, ‘Killer’ merges together these upbeat, fast-paced emo/ punk riffs, with a massive heavy metal breakdown with wailing guitars.

‘An Honest Mistake’ added to rotation on The Faction

“Oh! This is big and loud and fun as. I skipped the emo wave when MCR first came up so don’t think I’ll make the same mistake twice xD”
4 / 5 stars – Dave Ruby Howe, Triple J

“Hell yeah! I can really hear you give it your all in this one. Big MCR sounds for sure.”
4 / 5 – Claire Mooney, Triple J

“An upcoming Aussie act who will straight up fuel all your emo desires.”
Wall of Sound

This epic debut EP is out everywhere from Friday, June 5. Official EP artwork below 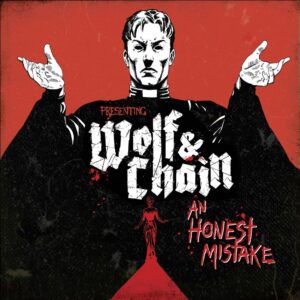