MELBOURNE INDIE-PUNKS SQUID FISHING ANNOUNCED AS MAIN SUPPORT FOR MINNESOTA-BASED TINY MOVING PARTS TICKETS ON SALE NOW VIA CHOPDOG ENTERTAINMENT  ALBUM ‘BREATHE’ OUT NOW THROUGH HOPE
In September Minnesota-based trio and family band Tiny Moving Parts released their fifth album ‘breathe’ through Hopeless Records and announced their return to Australian shores – this time for their first ever run of headline dates! Today the band are unveiling local supports for their national tour alongside Squid Fishing beginning January 2020. Tickets on sale now via Chopdog Entertainment!
Presented by Chopdog Entertainment, Tiny Moving Parts will tour their particular brand of thoughtful emo indie-rock around the nation beginning Friday January 24. The first stop is Newcastle’s Hamilton Station Hotel which will take support from fellow emo rock outfit signed to Resist Records, Jacob. Next on the map is Sydney’s The Lansdowne Hotel on Saturday January 25, supported by another Resist Records band, Oslow before playing their all ages Sydney show the next day at The Metro Lair supported by Zen Haircuts. Monday January 27 will see the band travel North to Brisbane to play Crowbar with help from punk’s Blind Girls, Wednesday 29 January the boys are off to Lucy’s Love Shack in Perth without their main support Squid Fishing, but will have Lionizer and Alex The Kid alongside in turn. Friday January 31 will see Tiny Moving Parts play Crown & Anchor in Adelaide with support from Madura Green, before rounding out the tour in Melbourne to play Wrangler Studios with Turn South on Saturday February 1 for another all ages show, and finally The Evelyn Hotel on Sunday January 2 with pop-rock band Self Talk.
Brand new album ‘breathe’ sees Dylan Mattheisen (vocals/guitar) and his cousins Matt Chevalier(bass) and Billy Chevalier (drums) grapple with mental health, anxiety and mortality while actively pushing their own sonic boundaries. Their fifth full-length offering was recorded with longtime collaborator Greg Lindolm and established pop producer John Fields (All Time Low, Jimmy Eat World, Goo Goo Dolls) and melds the bands trademark math-rock, pop-punk, emo sound (with a few sprinkles of electronic and a touch of banjo) with a lyrical backbone set to remind us that we’re all in this together. ‘breathe’ is an album that will flourish in its live setting where the intentions of the album can be echoed across the country.
More than just a collection of songs, ‘breathe’ serves as an emotional crutch in times of darkness, when we’re searching for understanding, when we need a friend. ‘breathe’ is the band coming together to face their own demons, their own mortality, their own anxieties and their own self doubt. These ten new tracks are a collective reminder that as long as there are songs sung back as if our lives depend on them, we are never alone.
Since their appearances in support of Luca Brasi in August last year, the trio have toured extensively across North America and Europe and are excited to cross the Pacific ocean to bring their visceral live show down under. Tiny Moving Parts brand new album ‘breathe’ is out now through Hopeless Records and is available at iTunes & Apple Music/Spotify/Google Play and all good online stores and streaming outlets. Tickets for the Australian tour are available now via Chopdog Entertainment. 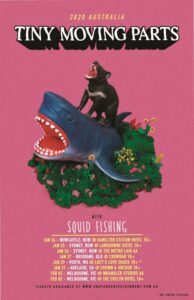