The Rubens have surprised fans by releasing their Live In Life Remix EP, a kaleidoscopic collection of ‘Live In Life’ remixes featuring local favourite Alice Ivy alongside international offerings by NASAYA, Pink Skies & Father Bobby Townsend. The release today is a treat to fans in light of the unfortunate second postponement of their largest headline tour to date due to COVID-19 (originally scheduled from May – July, then Sept – Dec). The new dates, taking place from April – June, 2021, will see the NSW band play metro cities for the first time since their 2018 LO LA RU album shows, across venues such as Fortitude Music Hall (Bris), Freo.Social (Freo), The Forum (Melb), and the Enmore Theatre (Syd). After having embarked on 3 regional tours in the past 18 months, the band will be revisiting some old regional favourites as well as some towns they’ve never played before, including Bundaberg, Warrnambool, Shepparton and more.

The Rubens:
“We’ve been blown away with the response to our track ‘Live In Life’, both online and the few times we got to play it live for you. For obvious reasons, unfortunately we have to reschedule the ‘Live In Life’ tour again, but as a show of thanks for your ongoing support we enlisted the help of Alice Ivy (our main support for the Live In Life Tour) for a remix, as well as alternate versions from Father Bobby Townsend, NASAYA and Pink Skies.
Hold on to your tickets if you can, as these new rescheduled dates may just become an album tour….in the meantime, blast these remixes and look after each other. Love you all. X”
The tour, presented by triple j, is in celebration of their hit single, ‘Live In Life’ – undeniably one of the biggest domestic singles of the last 12 months. Having amassed 30+ million streams across platforms, the single spent close to two months in the top 3 of Spotify’s Hot Hits Australia playlist, including 3 weeks at #1 and has become a staple of the playlist over the last 8 months. Live in Life has also spent 8 months on Apple Music’s Todays Hits and has been Shazamed 100,000+ times in Australia alone.
The band followed-up ‘Live In Life’ in a big way with the release of ‘Heavy Weather’ in April. The track was added straight to triple j, landed at #1 on Spotify’s New Music Friday and saw the band grace the coveted playlist cover, as well as tremendous support from Apple Music across New Music Daily & Today’s Hits. ‘Heavy Weather’ is all about empowerment; an anthem reminding us all to take control of the inner critic and back yourself when times get tough – a message that seems timely in this new world order.
ALICE IVY:
Melbourne-based electronic producer Alice Ivy released her debut album I’m Dreaming in February 2018 and has since performed more than 250 shows worldwide. Alice Ivy’s eclectic signature sound spans sample-influenced soul, hip-hop and electronic pop that she brings to life live as a multi-instrumentalist.
“I was so stoked to be asked by the Rubens to remix ‘Live In Life’. When I first listened to the stems and dropped them into Ableton I envisioned flipping this song into a moody house banger, I feel like I kind of achieved that?! Super stoked to have this out and to be joining them on their album tour in 2021”.
NASAYA:
NASAYA draws influence from the ethnically diverse culture of his homestead. Inspired by the breeze and easy-going nature of the French Island, his musical influence draws from jazz, dance music, pop, and even classic rock. With releases on Majestic Casual and Concord Records, NASAYA’s colourful sound is home to some of music’s finest tastemakers.
“I made this remix when I was stuck back home in Reunion Island while in lockdown.
It was quite tough for me to stay inspired and ‘productive’ at the time and working on this remix definitely helped me to stay a bit more sane – it was such a fun process and helped me to take my mind off what is going on in the world.”
PINK SKIES:
California’s Pink Skies’ sound is a genre-bending mix of psychedelic rock, pop, R&B, 70’s, electronic, hip/hop and chill- wave. Racking up credits with artists like 6LACK, Khalid, Glass Animals’ Dave Bailey and FWDSLXSH, Pink Skies is blazing a trail as an artist’s artist.
“When I first heard the track I thought it was awesome. I particularly love the line about the beer in the cellar, I’ve never heard a lyric like that in a song before. I spent a couple of days with the track, and tried to make it my own. I think I had like 5 different versions of the song, and this one felt like it had the best pocket. I’m happy that it’s out, and I hope everyone is into it!”
FATHER BOBBY TOWNSEND:
Father Bobby Townsend is a music producer, songwriter and multi-instrumentalist from Canada. He had his musical epiphany, falling in love with pop music, after discovering The 1975 on YouTube.
“I’m a sucker for slow jams so when my manager sent me the song I thought damn this is great, I’m gonna decelerate this baby. This is my late night drive in the rain remix. Big thanks to The Rubens for letting me hop on the project.” 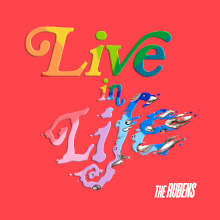 Stay connected with The Rubens