VINYL TO BE RELEASED

Bloodlines is set to release a triple vinyl edition of performances from the iconic 1973 Sunbury festival. The original release of The Great Australian Rock Festival – Sunbury ’73 was the first ever Mushroom Records album release, and the first ever Australian triple album release. Recorded by John French, it is the definitive document of the second running of the Sunbury Festival.

“With Sunbury, we wanted to make a statement that Mushroom was a serious record label that we wanted the retailers, the media, the musicians, the public to take seriously and know we meant business for Australian music. I thought it was an amazing coverage of what was three days of incredible Australian music. And it was the perfect springboard for the label and consolidation for Madder Lake and the other bands that were there at the time.” – Michael Gudinski

“It was a landmark event. A watershed, in a sense. Before Sunbury, anything Australian was regarded as second-rate. Import record shops were all the rage and people thought of Australian music as being second-rate to what was going on overseas. Sunbury was the start of people standing up and feeling proud of their own music.” – Michael Gudinski
“It was very tribal. Without getting too deep, you had a sense of being part of an extraordinary event. We connected to the greater whole, whatever that is. It was certainly a spiritual experience.” – Billy Thorpe
“The second Sunbury proved even bigger than the first. Performers and audience agreed they just had to be there. No international act required.” – Ed Nimmervoll
“Sunbury set up Countdown and set up the Australian public for Australian bands. It showed that we didn’t just have to rely on English bands or American bands, that we could really, really hold our own.” – Ian “Molly” Meldrum
“Sunbury 1972 was the first, but the 1973 festival is often remembered as the best. It has a place in our music history, just like the vintage clips of The Easybeats performing ‘Friday On My Mind’ and AC/DC travelling down Melbourne city streets on the back of a tray truck while belting out ‘It’s A Long Way To The Top’.” – Steve Waldon, The Age
Alongside the original release of The Great Australian Rock Festival – Sunbury ’73, a six-track record was also produced, featuring highlights from Friends, Madder Lake, Country Radio, Johnny O’Keefe, ‘69ers, and Glenn Cardier. This 6-track record is now highly collectible.
The 2021 pressing of The Great Australian Rock Festival – Sunbury ’73 is pressed on watermelon red vinyl, to commemorate Michael Gudinski selling watermelons at the festival. 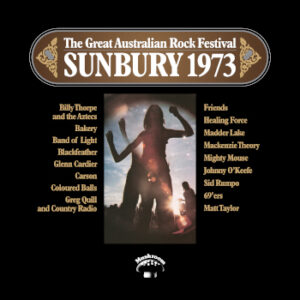