HER DRUM AND BASS INSPIRED

POP SINGLE ‘TAKE IT OFF’

The Baroness (a.k.a Michaela Baranov) follows up her debut record with another electrifying pop single titled ‘Take It Off’, released today on Central Station Records. Teaming up with renowned producer Xavier Dunn who is known for his work on gold-accredited records with the likes of Jack River and GRAACE. The festival-ready anthem seamlessly crafts together a driving drum and bass beat, with The Baroness’ dreamy vocals, highlighting her pop sensibilities.

Talking about the influences behind the record, Michaela elaborates, “‘Take It Off’ was made for the festival stage, inspired by some of my favourite artists who create huge energy in live shows and also in the studio – Gesaffelstein, Bicep and Alison Wonderland. I wanted the song to have the depth of drum and bass with a singalong melody.”

Releasing her debut single ‘Another Day’ earlier this year, the Newcastle based singer-songwriter caught the attention of Tonedeaf and Women In Pop. The Baroness has already captured a broad fanbase from her energetic performances as the official touring vocalist for Peking Duk,performing to 75,000 people at Australia’s bushfire relief concert – ‘Firefight’ as well as countless festivals, including Lost Paradise, Yours and Owls, Falls Festival and Fuji Rock. No stranger to the Australian music scene, Michaela has also toured alongside Flight Facilities playing shows around the country as well as joining the duo for tours in Asia, Europe and the US. This year, The Baroness debuted her live show supporting indie-pop sensation Amy Shark for her hometown performance at The Star on the Gold Coast. 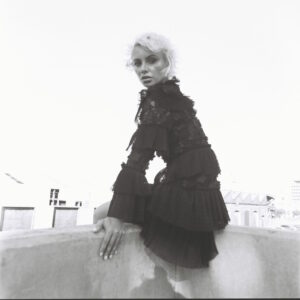 ‘Take It Off’ is out now via Central Station Records.