First introducing themselves last year with the sweeping shoegaze infused dream-pop track‘Never Change’, Sydney band Grids & Dots are back with new music for 2020. Their latest single, ‘The Great Divide’ continues to establish the group as a dynamic musical trio; utilising a strong handle on their influences in creating a sound completely theirs.

Though it is a track about connections, loss and absence, ‘The Great Divide’ is a song filled with warmth. Rhythmic and rich in vocals and harmonies, it’s a striking release from Grids & Dots, who are charging ahead for the second half of the year.

Recorded at Hercules Street Studios in Surry Hills with Wayne Connolly (Paul Dempsey, Boy and Bear), ‘The Great Divide’ came together later in their sessions together, but became a strong frontrunner. “Wayne liked the demo so much that he insisted we get it down along with the other songs. The band was completely unprepared for it at the time, and we worked a lot of the rhythm section parts and song structure out on the spot in the studio. Nevertheless, Wayne was right and we thought it sounded sweet and dreamy enough to be our second single.” Grids & Dots

The song itself has a sad and nostalgic tone to the lyrics, as Carmen Minikus and Daniel Handaru’s voices weave dreamily around one another. ‘The Great Divide’ is a look into relationships gone wrong, and the journey back to finding yourself. “It’s a really sad song about absence and how it can leave you feeling less than whole, but it’s also about being freed from people who can make you sad.” Grids & Dots

For the music video, Grids & Dots worked with director Paul Matereke (Treason Flowers) and filmed across a number of Sydney locations.

“The video takes the topic of distance between people and has fun with it. It’s about three people who are barely friends in the real world but once they leave this reality via virtual reality and suddenly become great buddies, band mates living out their fantasies in wonderful places. But what happens when they come back to the real world again?” Grids & Dots

Watch ‘The Great Divide’  below

“Melodic and with elements of shoegaze, their sound captures their busy inner-city lives with guidance through romanticised melodies. Influenced by both 80’s synth-pop sense of harmonies and noise driven shoegaze bands, Grids & Dots balance themselves in an indie pop surrounding that still hits the mainstream mark. A wonderful debut from a band we’re looking forward to hearing progress.”
Clout Magazine

“Grids & Dots glide through a concoction of shoegaze, psych-pop and noise-rock to deliver something uniquely their own.”
Happy Mag 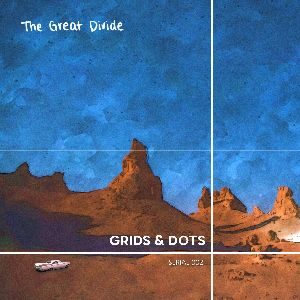