APRIL & MAY SECOND AND FINAL

ROCKET SCIENCE TO SUPPORT ALL SHOWS


Frontier Touring are excited to announce a second and final Melbourne show by Britpop legends Supergrass. This now six-date run will be the band’s first headline shows on our shores in twelve years and will coincide with their scheduled performances at Groovin The Moo festivals across Australia.

The English rockers will now bring their string of hits to an additional audience at Melbourne’s The Forum on Thursday 30 April and will be supported by Rocket Science at all Australian headline performances.  With the first show quickly selling out this morning the second Melbourne show is on-sale now.

Since forming in Oxford UK in 1993, Supergrass have received nods from the BRIT Awards, NME Awards, Q Awards and Ivor Novello Awards and are widely-recognised as one of the most important bands to emerge during the 1990s. To mark the 25th anniversary, The Strange Ones: 1994 – 2008 was released in January 2020.

Don’t miss your chance to experience one of Supergrass’ first headline performances in Australia in 12 years, tickets to the second Melbourne, Perth, Sydney, Wollongong and Brisbane shows are on sale now via frontiertouring.com/supergrass 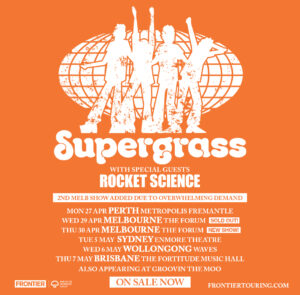 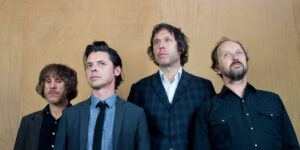 Saturday 2 May
Groovin The Moo | Bendigo, VIC
All Ages

Sunday 3 May
Groovin The Moo | Townsville, QLD
All Ages

Saturday 9 May
Groovin The Moo | Maitland, NSW
All Ages