STRAY FROM THE PATH

PREMIERE NEW SINGLE ‘THE FIRST WILL BE THE LAST’

Days away from the release Of their ninth studio album, Long Island hardcore heavyweights Stray From The Path have lifted the lid on a new single called ‘The First Will Be Last’. The track enjoyed a worldwide premieredvia Billboard over night ahead of the release of Internal Atomics this Friday November 1 via UNFD.

In true Stray From The Path form ‘The First Will Be Last’ is rooted in social conscious and commentary, backed by pummelling drums, thick bass ands non-stop riffage. Spitting lyrics like “What goes around comes around, When a hand reaches out, you don’t reach back“, the band lash out at those in positions of power that have selfish outlooks and a lack of empathy for those in need on this track.

Stray From The Path have kicked off their worldwide assault in support of Internal Atomics, currently on the road with Counterparts in North America, and will embark on their biggest UK/EU headline shows to date in December with support from The Devil Wears Prada, Gideon, and Loathe. They’ll head Down Under in January for their headline tour with support from Kublai Khan, alongside an appearance at UNIFY Gathering 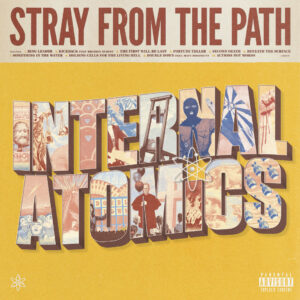